I have come across the following Canadian genealogy, history and heritage websites, social media, and newspaper articles this past week that were of interest to me, and I thought you might be interested in them, too.
This Week in Canadian History
Men Wearing Masks During the Spanish Flu, Alberta Fall 1918 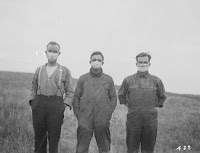 
http://www.novanewsnow.com/News/Local/2015-10-19/article-4314050/Yarmouth-building-renovation-unearths-interesting-family-history/1
Clifford R. Hayes was the signature written on a piece of wood that workers unearthed during renovations at the new location for Surette’s Jones Gym at 345 Main St.
Absolutely nobody wants to be Halifax’s town crier
http://www.thecoast.ca/RealityBites/archives/2015/10/21/absolutely-nobody-wants-to-be-halifaxs-town-crier
Council votes to leave ceremonial position unfilled due to lack of applicants.
Ontario
TORONTO ROOTS: Beyond the grave: Don’t overlook the cemetery registers when searching for your family’s history
http://www.insidetoronto.com/news-story/5971138-toronto-roots-beyond-the-grave-don-t-overlook-the-cemetery-registers-when-searching-for-your-famil/
There's nothing quite like the instant thrill of brushing aside shrubbery or tugging away overgrown sod in a cemetery and uncovering a name you recognize – the feeling of connecting with an ancestor you may never have met in person.
Sarah Mushtaq: Islam's 144-year history in Canada
http://windsorstar.com/opinion/columnists/mushtaq-islams-144-year-history-in-Canada
According to the 1871 Canadian Census, four years after Canada’s birth, there were 13 European Muslims in this country. 1882 saw the arrival of the first Arab immigrants — both Christian and Muslim — who were mainly Ottoman Syrians fleeing conscription.
This eventually led to the construction of the first Canadian mosque in 1938 in the city of Edmonton.
The Amateur Genealogist: Where there’s a Will – There’s Genealogical Gold
http://www.mykawartha.com/opinion-story/5969228-the-amateur-genealogist-where-there-s-a-will-there-s-genealogical-gold/
Many beginners do not look for wills -- “My family was too poor to have a will.”  There are many more wills than people suspect, so you should always look for one.  Furthermore, if a person died without a will (died intestate) someone often had to apply to the courts for permission to administer the estate. These Letters of Administration – loosely called Admons – are indexed with the wills.
Statues to memorialize Canada’s prime ministers would be ‘culturally insensitive’: university
http://news.nationalpost.com/news/canada/canadian-politics/statues-to-memorialize-canadas-prime-ministers-would-be-culturally-insensitive-university
More than a year after Kitchener, Ont., rejected it, a proposal to install statues of all 22 Canadian prime ministers at nearby Wilfrid Laurier University is once again facing accusations that it is “politically and culturally insensitive” to memorialize Canada’s heads of governments.
Celebrating women's history
http://www.insidehalton.com/opinion-story/5974167-celebrating-women-s-history/
Women's History Women's Month is a national celebration each October highlighting the contributions of women and girls to Canada’s rich history.
House of Refuge
http://www.canadashistory.ca/Community/Community-Features/Articles/House-of-Refuge
Passion for the past inspires a young historian in Cornwall, Ontario, to memorialize inmates who died at a local ‘poor house'.
Manitoba
Manitoba Museum gets $10M from province for renewal.
http://www.cbc.ca/news/canada/manitoba/manitoba-museum-gets-10m-from-province-for-renewal-1.3272919
The Manitoba Museum is embarking on its largest-ever renewal and received a big boost Thursday with a $10-million donation from the province.
Alberta
Day in History, Oct. 21, 1925: Telephone service links Alberta to rest of Canada, U.S.


http://edmontonjournal.com/news/local-news/day-in-history-oct-21-1925-telephone-service-links-alberta-to-rest-of-canada-u-s
Alberta took a big stride forward with the introduction of direct telephone service linking the province with other parts of Canada and the United States.
Lougheed House exhibit explores Canadian women's roles in WWII
http://calgaryherald.com/news/local-news/lougheed-house-exhibit-explores-canadian-womens-roles-in-wwii
A new exhibit at Lougheed House showcases the lives of Alberta women who served in the armed forces during World War II.
Eamon's building may get moved from storage to High River
http://www.cbc.ca/news/canada/calgary/eamons-building-may-be-heading-to-high-river-1.3282226
The city is negotiating with a High River group that wants to buy the Eamon's gas station, a 1950s building the city bought three years ago to make way for the park-and-ride lot at the Tuscany LRT station.
British Columbia
In what kind of shape is your ‘Stop of Interest?'
http://www.kelownacapnews.com/community/334829611.html
Heritage BC wants to give Central Okanagan residents the chance to shape what ‘Stop of Interest’ should look like to commemoratief historic people, places, and events.
There are many ways to participate in this process and prizes can be won.
And that was the week in Canadian news!
=============================================================

Check the Canadian Week in Review (CWR) every Monday morning for the latest in Genealogy, Heritage, and History news in Canada.
If you missed last week’s edition, it is
at http://genealogycanada.blogspot.com/2015/10/canadian-week-in-review-19-october-2015.html
It’s the ONLY news blog of its kind in Canada!
It has been published on a continuous basis every Monday since April 2012!
Posted by Elizabeth Lapointe at 6:32 AM No comments: