The first question out of Brian Gilchrist——the Reference Archivist of The Region of Peel Archives who was at the Library and Archives Canada yesterday to give the second annual Ryan Taylor Memorial Lecture——was the question, "How savvy a researcher do you think you are?" 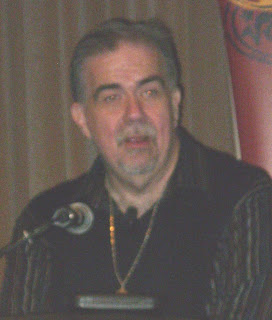 And this was just the first of many questions he asked during his lecture, the purpose which was to spur everybody on to evaluate their research - what is the quality of your research?

Do you, as you are supposed to, always work from the known to the unknown? Do you always ask the correct question of fellow genealogists, librarians, and archivists?

I was reminded of a question that I have had since I started my own genealogy in 1994. That is why my g-g-g-g-grandfather Andrew BARCLAY had listed as his occupation - a bookbinder, and not as a farmer as was his father's business?

He was not the first son, so he did not get the land owned by the Barclay's in Kinrossshire, Scotland ... so was else was he to do? But bookbinding seemed so off the wall at first glance. Why bookbinding?

Through research I found that his grandfather had been a bookbinder in Edinburgh! And that area of Scotland there had been a huge trade in printing, and bookbinding, a profession he would take with him to the United States in c1760.

But maybe the most important question Brian asked through the entire lecture was the one he finished with - "What legacy have we left behind?"

That is perhaps the most important question these days since so many Canadian genealogists over the past three or four years have died. (In our immediate area, there are three nationally-known genealogists—-Sandra Devlin, Ryan Taylor, and Paul McGrath——who have passed on since 2005). Where has their work gone? What has happened to it?

Have you made a provision in your will to give direction to your executive as what to do with your papers, photos, video, and anything else you may have discovered along the way? What will happen to your genealogical "stuff"?

These questions he raised yesterday have made me think. I plan to finish the BARCLAY genealogy over this winter, and post it to the Internet as well do a limited production run of it to give to the Shelburne County Genealogical and Archives in Shelburne, Nova Scotia. I also have photos, certificates, and other family memorabilia which I plan to give to them for safekeeping, and for other people to research.

So, have you done the same thing with the "stuff" you have collected?
Posted by Elizabeth Lapointe at 12:35 PM 1 comment: