This past weekend, on a sunny and crisp Saturday morning, we went to the Library and Archives Canada in Ottawa to see and hear the "Beginners Course in Genealogy". The next three blogs will focus on the presenters and their topics they gave because it is important (among other reasons) that people know that genealogy is thriving in the Ottawa area!

Today, I will start with John Reid.

It was the second course we had attended (the first, being last fall), and there was an overwhelming crowd, as you can see in the pictures. 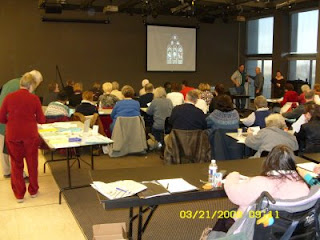 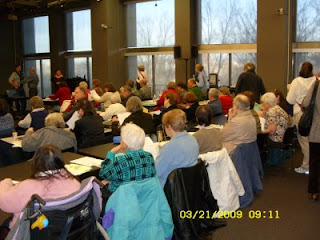 Photos 1 & 2 - We were told beforehand that they were sold out, and they were! People crowded into the large room, eager to hear the presenters give their talks during the "Beginners Course in Genealogy". Credit: J.M. Lapointe, CD

The first presenter was John D. Reid, author, lecturer, and member of the Ontario Genealogy Society (OGS, Ottawa Branch) and the British Isles Family History Society of Greater Ottawa (BIFHSGO). He went over the first steps one should take when embarking on family research, according to Family Tree (UK) Magazine, and they are to -

1. Work Backwards - Start with a person of interest - be it your father or grandfather, for instance.

2. Be Organized and Honest - Record everything you find out about the line you are working on. What results will you accept with your findings?

3. Interview Your Relatives - Interview the elderly first since they may not be with us much longer, and they usually have lots of stories to tell!

4. Set Your Sights - Pick which line — for example, your paternal line — that you are going to follow. When you are finished that line, pick another one.

5. Understand Surnames - Do a bit of history on the surname. What does it mean? Where does it come from? Also, why did the family move from one area to another, or from one country to another. What were the push/pull factors of migration?

6. Societies and Education - Try to join a society in the region of origin of your family, and, of course, take courses (like the one being offered here). Learn from the people who went before you, and you will be in good company.

7. Use Technology - There are software programs specially manufactured to fit your genealogy, so use them. Technology also includes the Internet, online databases, and DNA testing. 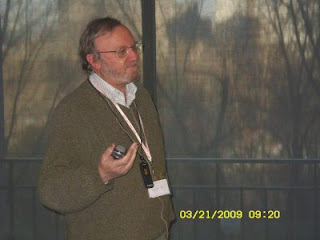 The organizers promise that there will be an intermediate course in the fall as part of the BIFHSGO Conference, held Sept 18th to the 20th, and it will cover such topics as "Tips & Tricks with Ancestry.ca", "More to Newspapers Than Obituaries", and "Now That I Have Done My Research, How Should I Write it Up?".

Tomorrow, I will cover the presentation about the Canadian Census with Glenn Wright.

A write-up of Saturday's course will also appear in the April edition of the OGS e-NewsLeaf. which will be issued around the middle of next month.
Posted by Elizabeth Lapointe at 5:57 PM No comments: Links to this post