Writing Up the Ancestors http://www.writinguptheancestors.blogspot.ca/
Genealogist and Montreal writer Janice Hamilton recently started a genealogy blog about her family who lived in Canada, the US, England, Scotland, and Ireland. What sets this blog apart from many are the research remarks Janice adds at the end of each story. Not only can blog followers learn about Janice’s ancestors, they learn how she pieced together their story.
The Most Controversial Figure In Canadian History Is… http://rickpaulettervjournal.blogspot.com/2013/11/the-most-controversial-figure-in.html Rick Doyle is an RVer, but this time he writes about Louis Riel who was hanged on November 16, 1885 at the Northwest Mounted Police(RCMP) barracks in Regina, SK.for treason.

There are still a few seats remaining to attend the event on site but Canadians can also watch a live broadcast of the presentations.

Nova Scotia's tree for Boston begins journey http://www.ngnews.ca/News/Local/2013-11-12/article-3478263/Nova-Scotias-tree-for-Boston-begins-journey/1 Mary Lou Milligan donated this year's tree from her property in Mill Cove to Boston. For forty-two years Halifax has been sending a Christmas Tree to Boston, Mass in appreciation for the medical personnel and supplies Bostonians provided after the explosion of Dec. 6, 1917.

Piece of Saskatoon history becoming target for vandals http://metronews.ca/news/saskatoon/852333/piece-of-saskatoon-history-becoming-target-for-vandals/ The Farnam Block, former home of Lydia’s Pub, was constructed in 1912 and has seen two World Wars alongside its share of interesting and unusual tenants.

Yarmouth council defers decision on Zion de-registration http://www.novanewsnow.com/News/2013-11-14/article-3481869/Yarmouth-council-defers-decision-on-Zion-de-registration/1 The council defers the decision on the Zion Baptist Church in Yarmouth, Nova Scotia to remove the church from its municipal heritage registry to give the province's Heritage Trust time to decide whether to make a formal offer of assistance to the church's trustees, and it is considered to be a last ditch effort to save the church from demolition. 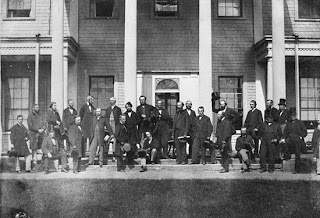 Father of Confederation (c) Collections Canada
PEI gets ready for 2014

Over the past year, I have been reading about how the Prince Edward Island government has been getting ready for the 2014 events as PEI celebrates 150 years since the Fathers of Confederation meeting in Charlottetown.

Canada's smallest province on the east coast of the county, wants everyone to know that's where the idea of forming a country began 150 years ago.

The premiers of P.E.I., New Brunswick, Nova Scotia and what are now Ontario and Quebec all sat down at a table in the government house in Charlottetown and held talks for eight days in September of 1864. And they eventually came up with the idea of a confederation of provinces which would lead to the country of Canada.

Present-day premier Robert Ghiz says there will be 150 events that will take place all across the province. There will be concerts, theatre festivals, ecotours, culinary events, sailing regattas, to the Celebration Zone in Charlottetown where there will be free entertainment for the whole family every day over the summer.

Reminder: Check the Canadian Week in Review next Monday for the latest in Genealogy, Heritage, and History news in Canada. It’s the ONLY news blog of its kind in country! The next post will be on 24 November 2013.
Posted by Elizabeth Lapointe at 12:30 AM 1 comment: Links to this post