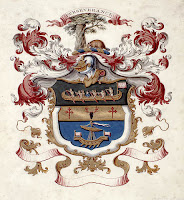 April 24, 1779 – The North West Company is formed in Montreal to compete with the Hudson’s Bay Company in the fur trade. It was founded by Simon McTavish, who had emigrated to Canada from Scotland at the age of 13 in 1763.

To learn more about the company, go to http://www.thecanadianencyclopedia.ca/en/article/the-north-west-company-17791821-feature/

Janet Denstedt and her husband, Richard Wharton, visited Twillingate 13 years ago. And they have bought and fully restored eight salt box houses - to rent them to others who want to stay in houses when they visit instead of hotels. Interesting idea!

RCMP Sgt. Craig Smith asked students for the names of five famous black Americans. Then he wanted to know who were the Atlantic Canadian black heroes. The Grade 11 students at the Northeast Kings Education Centre could only name three people. I think there is a lot of work here to do!

On February 27, 1912, following what appears to have been at least a few years of behind-the-scenes deliberations, the federal government expropriated all properties located in Uppertown, an area bounded by Bank, Wellington, and Bay Streets, and the cliff along the Ottawa River.

A mystery that is more than 250 years old and buried near the historic Lunenburg Academy may soon be solved.

A star-shaped fort built by the British in 1753 had almost melted away into history until Saint Mary's University researchers found evidence of it through a geophysical survey.

‘Wash Cornwallis away’ and back to Narrow River?

Last December, Premier Stephen McNeil, asked that a Department of Transportation sign for Cornwallis River be taken down after a request from Mi'kmaq elder Dan Paul. He asked that the English name of the Cornwallis River be replaced by the name  Mi'kmaq- Jijuktu'kwejk River (pronounced Gigi-wh`tuk) meaning the Narrow River.

The only physician to be prime minister was inducted into the Canadian Medical Hall of Fame. Sir Charles Tupper was from Nova Scotia.

A monument to European immigrants of multiple nationalities who came to work at the steel plant in Sydney at the turn of the last century may have to be removed and replaced.

The New Brunswick Museum Archives will tell the story of how Saint John's ever-changing Rockwood Park evolved from an idea to what it is today.

The archives are getting ready for a public event that will discuss the history of the massive urban park.

For years, the name of a road east of Sussex in Kings County has been an ugly reminder to New Brunswick's past. Many looked at "Negro Brook Road" as a leftover of a racist heritage. But now the read has been renamed.

It's now called the Harriet O'Ree Road, a name with special significance to the area.

Fairmount Cemetery announced the opening of its new event center, named Quebec Place at Fairmount. The opening of the event center reflects a national trend among cemeteries to provide spaces for gatherings and celebrations that aren’t funeral related, and is the newest addition to the historic cemetery’s $8 million renovation project.

A significant piece of Whitby’s past is now back in local hands with the return of a collection of historical documents to the community, including some dating back more than 150 years.

Port Hope had a history of rum-running

Return to Centre is an external exhibit on the outside of the first post office in Toronto. The artists are Joanne Tod and Jon Reed, who were enlisted to pay homage to the 1834 first post office, a historic fixture in Toronto’s St. Lawrence neighbourhood.

Heritage Park is marking the 100th anniversary of some Alberta women getting the vote with a new interactive exhibit.

Caucasian women in the four western provinces were the first to get the vote in 1916, and by 1919, all Caucasian Canadian women had secured that right, though it would be decades before it became universal.

Our travels will begin with the West Coast and work towards the East. Our journey begins with British Columbia.

This week, I finished a six-week Genealogy: Researching Your Family Tree FutureLearn course online, given by Tahitia McCabe, University of Strathclyde in Glasgow, Scotland and Course Leader for the MSc in Genealogical, Palaeographic and Heraldic Studies.

And the course is free!

I found this course helpful, and I was intrigued by their approach to genealogy, employing the the use of Google, two DNA lectures, and real life research by a woman of her family – very interesting.

So if you would like to take the course, go to https://www.futurelearn.com/courses/genealogy and register.

MyHeritage has a new MyHeritage Community, a Question & Answer hub on the MyHeritage website where users can receive help from others to solve family history mysteries, as well as help others in their genealogical quests.

A blog post about MyHeritage Community is on the MyHeritage blog, with some great examples of how users are helping one another.

This is where you go if you want to post your genealogy question - https://www.myheritage.com/community

(c)2016 All rights reserved.
Posted by Elizabeth Lapointe at 7:33 PM No comments: Links to this post