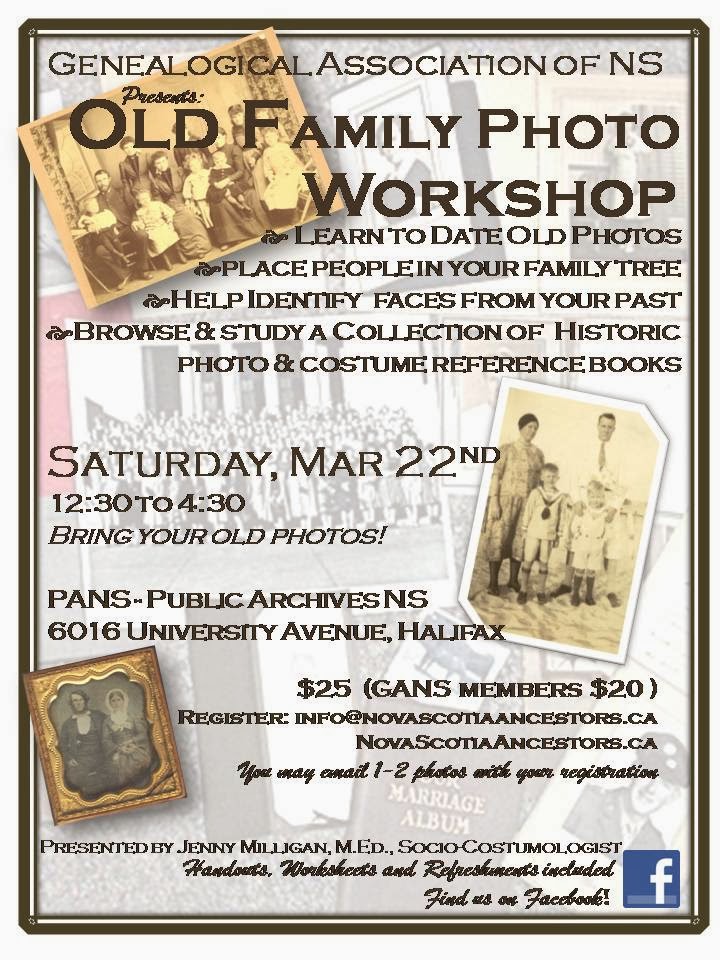 On Saturday March 22, 2014, the Genealogical Association of Nova Scotia will present a Photo Workshop as part of the monthly meeting to be held from 12:30 pm to 4:30 pm at the Akins A/V Room, Nova Scotia Archives, 6016 University Ave, Halifax.

The workshop will be lead by Jenny Milligan, MEd, Socio-Costumologist, and will cover -

Register by email to info@NovaScotiaAncestors.ca

You may email 1-2 photos with your registration.

Please note that only 20 places are available for this workshop.

The website of GANS is http://www.novascotiaancestors.ca/
Posted by Elizabeth Lapointe at 3:30 PM No comments: Links to this post

The Eastern Townships of Quebec http://www.rootsweb.ancestry.com/~qceastwn/ Its is almost 20 years since this site has been on the Internet. This area was a place where many Loyalists settlers, and immigrants from the British Isles settled.

Immigrants to Canada 1930-1950 $  http://www.orderincouncillists.com/205496156 This site has the surnames of immigrants online who came to Canada between 1930 and 1950, listed on the Orders in Council of the Privy Council of Canada. If you wish to receive the record, a fee will be charged.

Rideau Canal faces $104M maintenance and repair backlog http://www.ottawacitizen.com/travel/Rideau+Canal+faces+104M+maintenance+repair+backlog/9414058/story.html The Ottawa Citizen newspaper has calculated that Rideau Canal faces a huge amount of repairs that is not being done. This includes repairs to the canal locks, canal walls, dams, weirs, dams and so on.

Canadian school official pushes for new history curriculum http://www.ecns.cn/2014/01-22/98125.shtml A Vancouver School Board trustee has a motion to be voted on that British Columbia change the high school curriculum to include content on the contributions and discrimination experienced by early Chinese settlers.

Exhibit brings to light Italian Canadian strife during WWII
http://www.baytoday.ca/content/news/details.asp?c=57317 'Ordinary Lives, Extraordinary Times: Italian Canadian Experiences During World War II', is the title of a new touring exhibit by the Columbus Centre of Toronto.
Right now, it’s in North Bay where people can see about the time when Italian Canadians were put in internment camps during the 2nd World War. The exhibit will be open to the public from January 15th to April 18th of 2014, and there is a Video onsite.

Acadian Museum marks 50th anniversary Sunday http://www.journalpioneer.com/News/Local/2014-01-24/article-3590011/Acadian-Museum-marks-50th-anniversary-Sunday/1 Visit the Acadian Museum and see how it evolved into what it is today – a world class museum on Prince Edward Island. This exhibit will be open until May 2014.

Sikh museum in Canada to mark Komagata Maru centennial http://www.baytoday.ca/content/news/details.asp?c=57317 The Abbotsford’s Sikh Heritage Museum will host a special year long exhibit which will commemorate the 100th Anniversary of the Komagata Maru incident, during which 352 Punjabi immigrants on a ship from India were denied entry into Canada.

The City of Toronto Archives has a new site, and true to its word, it is better organized than the previous site.

The first thing you see when you go to the City of Toronto Archives is the Search the Archives window, and if you press on that site, you will be taken to a search box where you can enter your search term. You can find out where it is located in the archives, and then you can locate it easily when you visit the archives in the future.

You can also see what’s available at the archives for example - city directories, assessment rolls, court proceedings, fire insurance maps, and you can go online and look at their maps, view web exhibits, and photos.

You can look at This month in Toronto’s history, and Find out the history of your house, and Canada’s First Subway.

Plus, you can supplement your research at the Archives of Ontario and the Toronto family History Branch of the Ontario Genealogical Society with the City of Toronto Archives.

The site is at http://www1.toronto.ca/wps/portal/contentonly?vgnextoid=7cb4ba2ae8b1e310VgnVCM10000071d60f89RCRD&vgnextfmt=defaultt

Reminder: Check the Canadian Week in Review next Monday for the latest in Genealogy, Heritage, and History news in Canada. It’s the ONLY news blog of its kind in country! The next post will be on 03 February 2014.
Posted by Elizabeth Lapointe at 12:30 AM No comments: Links to this post