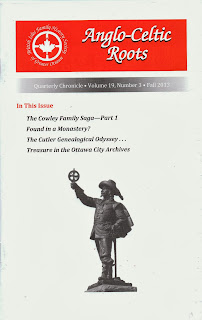 The British Isles Family History Society of Greater Ottawa (BIFHSGO)has issued the fall edition of its journal the Anglo-Celtic Roots.

There are a number of articles in this issue, and they are –

The Cowley Family Saga: From Sherwood Forest to the NHL – Part I by Christine Jackson which talks about the role that the Crowley family (they arrived in the Ottawa area from England in the 1830s) played in the development of the Ottawa Valley, and of Champlain Park, a housing development in the west end of Ottawa in the 1950s.

Found in a Monastery? by Brian D. Cook is a summary of what happened to tracing his maternal great-grandfather – Cuthbert Baker – from help by the BIFHSGO society, and genetic genealogy. .. and the records of the Benedictine Monastery in Europe.

The Cutler Genealogical Odyssey by Gillian Leitch tells of she successfully traced John Cutler from Eton, England who was employed as a clerk at the Tower of London. It is a fascinating story!

In the From the President message, Glenn Wright, says that they have imitated two projects that will result in two databases – the pre-Confederate immigrants from the British Isles (which will hold important names for researchers), and the second one will concern the First World War. So stayed tuned for developments on that front.

Betty Warburton keeps us up-to-date on the happenings at the library at the Archive of Ottawa, this month she tells us of the books on Ireland; John D. Reid talks about Canadiana.org, and the 1921 Census in The Cream of the Crop, and Ian White writes about The Ottawa City Archives: a Treasure Chest for Genealogists.

The Anglo-Celtic Roots (ACR) is available as a member benefit of BIFHSGO when you join the organization.

To join as a member, go to http://www.bifhsgo.ca