In 1937, public schools in Toronto opened after a six-week delay caused by a polio epidemic which claimed 150 lives.

Joanne Cowden, a new blogger, has ancestors in various US states, Canada, France, and Germany, and now she is starting to share these ancestors with follow genealogists.

Memorial planned for Nova Scotia woman murdered in domestic violence case a century ago
http://metronews.ca/news/halifax/1185379/memorial-planned-for-nova-scotia-woman-murdered-in-domestic-violence-case-a-century-ago
More than 100 years ago, the name of Theresa (Balsor) McAuley Robinson was on the lips of many Kings County residents. Her husband, William S. Robinson, was judged guilty of her murder and sentenced to death. He was the last person publicly hung in Kings County.

Legacy of local Springhill Veterans preserved
http://www.newswire.ca/en/story/1428894/legacy-of-local-springhill-veterans-preserved
Scott Armstrong, Member of Parliament for Cumberland–Colchester–Musquodoboit Valley, today announced Government of Canada funding for the restoration of the Springhill Soldiers' Monument, which honours the achievements and sacrifices of Veterans from within the community.

Libraries: Presenting history in a different way
http://www.ngnews.ca/Community/2014-10-13/article-3901804/Libraries%3A-Presenting-history-in-a-different-way/1
Discover history can be approached in a new ways at Nova Scotia libraries, such as storytelling and writing your own history.

Vandals can’t stop work on Black Loyalist Heritage Centre
http://thechronicleherald.ca/novascotia/1243763-vandals-can-t-stop-work-on-black-loyalist-heritage-centre
What promises to be one of Nova Scotia’s star attractions in 2015 is nearing completion in Shelburne County, despite a setback caused by vandalism.
During the 1780s, Birchtown had the largest population of free blacks outside Africa, when some 3,500 arrived there after the American Revolution.

History: Hantsport was flourishing 98 years ago
http://www.kingscountynews.ca/Opinion/Columnists/2014-10-12/article-3901493/History%3A-Hantsport-was-flourishing-98-years-ago/1
When a New Brunswick-based magazine published a feature on the  Annapolis Valley in 1916, Hantsport was one of the towns profiled.

Historic Edmundston church will soon be rebuilt
http://www.cbc.ca/news/canada/new-brunswick/historic-edmundston-church-will-soon-be-rebuilt-pastor-says-1.2797817
Anglican St. John the Baptist Church was destroyed in a suspicious fire on September 20th.

The First World War: Excerpts from the diary of Woodman Leonard
http://www.ottawasun.com/2014/10/16/the-first-world-war-excerpts-from-the-diary-of-woodman-leonard
Follow Lt. Col. Leonard during the weeks he travelled from battleground to battleground.

Quiz: Can you pass this Canadian citizenship test?
http://metronews.ca/news/ottawa/1184269/quiz-could-you-pass-a-canadian-citizenship-test
About 140 students from across the country were put to the Citizenship Challenge on Wednesday when they played a bingo-style game at the Chateau Laurier in Ottawa.

The Musées de la Civilisation de Québec to be honoured in Ottawa for their exhibition dedicated to Aboriginal peoples
http://www.newswire.ca/en/story/1427006/the-musees-de-la-civilisation-de-quebec-to-be-honoured-in-ottawa-for-their-exhibition-dedicated-to-aboriginal-peoples
Inaugurated in November 2013, This Is Our Story: First Nations and Inuit in the 21st Century, is the latest addition to the Musées de la Civilisation de Québec's (MCQ) permanent exhibits. This ambitious project offers a contemporary vision of the cultural diversity and Aboriginal realities within Quebec.

Stuart Stuart Murray out as head of Canadian human rights museum
http://www.thestar.com/news/canada/2014/10/15/stuart_murray_out_as_head_of_canadian_human_rights_museum_1.html
tuart Murray, a former Manitoba Progressive Conservative leader who oversaw the construction of the museum in Winnipeg since 2009, is leaving on November 1st, and another chief executive officer is being sought, the board of trustees said Wednesday.

The First World War: Excerpts from the diary of Woodman Leonard
http://www.ottawasun.com/2014/10/16/the-first-world-war-excerpts-from-the-diary-of-woodman-leonard
Follow Lt. Col. Leonard during the weeks he travelled from battleground to battleground.

City recognized for efforts in historic preservation
http://medicinehatnews.com/news/local-news/2014/10/16/city-recognized-for-efforts-in-historic-preservation
The City of Medicine Hat is gaining new recognition for a program to protect its history.

Touring BC's 'Hidden' History Shared by Chinese and Indigenous People
http://www.thetyee.ca/News/2014/10/13/Shared-Chinese-Indigenous-History
Every year for the last five years, Bill Chu has conducted treks along the Fraser Canyon, up to Lytton, Lillooet, and Mount Currie. His purpose: to educate Canadians about the "real" shared history of Indigenous and Chinese people in British Columbia. 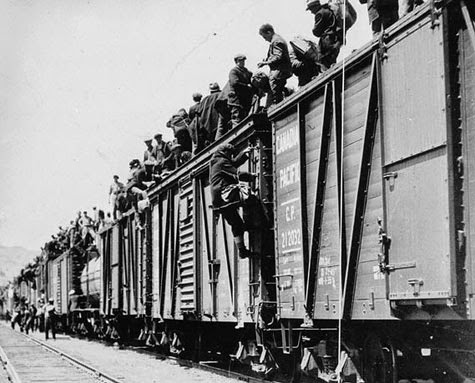 Starting in 1929, the Great Depression swept over the world, and it affected Canada greatly because of our dependence on exporting natural goods to countries that no longer needed them since their own industrial capacity was reduced because of the Depression.

It was a terrible time for our country.

When I was a child, I can remembers stories that my family use to tell of how they coped with the Depression, and of how my father took “to the rails” as a young man looking for work on the farms in Ontario . He found work on the fruit farms in the Niagara region of Ontario.

One of the imitative which brought my father back to Nova Scotia was the paving of roads that I wrote about in the post Nova Scotia Paving Programme in 1934 the government undertook http://genealogycanada.blogspot.com/2014/08/nova-scotia-paving-programme.html, and eventually the breakout of the Second World War.

If you have the occasion to research a person who was trying to come to Canada during the Depression years from the United states, for instance, do not be surprised if you find they were denied entry, unless they could prove that they wouldn’t take jobs away from Canadians.

If you want to learn more about the Great Depression, read this article - http://www.thecanadianencyclopedia.ca/en/article/great-depression/