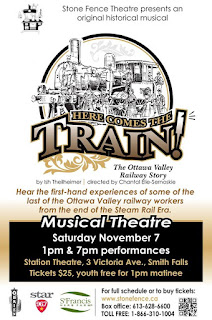 Here Comes the Train! The Ottawa Valley Railway Story, the latest hit musical from Stone Fence Theatre, is coming to Smiths Falls on November 7 for two performances at the Station Theatre.

The story of the show goes behind the scenes of life in the railway steam era, with much of it based on stories from Smiths Falls, collected with the help of the Railway Museum of Eastern Ontario.
The show looks at the lives of the people who worked on and around the trains and the impact railways had on the Ottawa Valley and Canada as a whole.

Most of the play is set in the 1950s, with a five-piece band and musical styles including bluegrass, blues and country/folk.

If you missed last week’s edition, it is
at http://genealogycanada.blogspot.com/2015/10/canadian-week-in-review-cwr-26-october.html

It has been published on a continuous basis every Monday since April 2012!
Posted by Elizabeth Lapointe at 7:07 AM No comments: