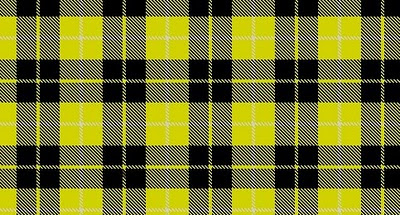 Here is my clan's dress tartan, that being the Barclay Clan.
(yellow and black with white overcheck)
Back on October 22, 2010, the Honourable James Moore, Minister of Canadian Heritage and Official Languages, announced that the Government of Canada made the official announcement that the country would recognize April 6 as Tartan Day.

"A tartan represents a clan, a family, and a community, and is an enduring symbol of Scotland that is cherished by Canadians of Scottish ancestry," said Minister Moore. "Many Canadian provinces and other countries already celebrate Tartan Day. As well, through Tartan Day, Canadians will have an opportunity to learn more about the various cultures that comprise Canadian society."

Tartan Day originated in the late 1980s in Nova Scotia, where it was declared an official day by the provincial government. It then spread across the country, with many provinces joining in. This marks the first time the Day has been recognized by the federal government.

"By officially recognizing this Day, we encourage Canadians all across the country to celebrate the contributions that over four million Canadians of Scottish heritage continue to make to the foundation of our country," said Senator John Wallace, who recently introduced a bill in the Senate in support of nationally declaring Tartan Day.

In Canada, Tartan Day is celebrated on April 6, the anniversary of the Declaration of Arbroath, the Scottish Declaration of Independence. Tartan Day celebrations typically include parades of pipe bands, Highland dancing and sports, and other Scottish-themed events.

For an online copy of the Declaration, please visit http://ucsac.blogspot.com/2011/02/tartan-day-just-around-table.html.

As well, check out the Tartans of Canada website for the official and non-official tartans of Canada, the provinces, and the territories www.craigmarlatt.com/canada/symbols_facts&lists/tartans.html

From Scotland On Line, check out the thousands of tartans for your own clan or related septs at www.tartans.scotland.net/find_tartan.cfm.htm. The site shows samples of the tartan, and offers a history of it. Truly, an awesome resource.

And for a history of the tartan, check out Wikipedia - http://en.wikipedia.org/wiki/Tartan 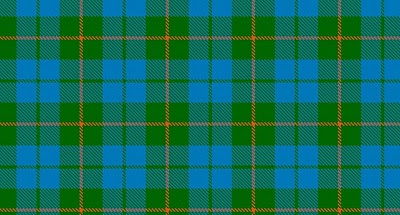 Here is Clan Barclay's hunting tartan
(blue and green with red overcheck)
Posted by Elizabeth Lapointe at 9:05 PM 1 comment: Links to this post