Elgin County Ontario Canada and Talbot Times Genealogy Blog http://elgincountyogs.blogspot.com/2014_04_01_archive.html
If you have ancestors in Elgin County, this is a blog that you should put in your reader to keep abreast of the historical documents that are online.

The CRA and LAC
http://www.cha-shc.ca/english/news/the-cha-and-lac.htm#sthash.JtyLWN2N.dpbs
The Canadian Historical Association / La Société historique du Canada is pleased with the appointment of Dr. Guy Berthiaume as the new head of Library and Archives Canada.

St. James church building in Gatineau damaged by fire. Century-old building, being turned into furniture store, suffers only smoke damage.
http://www.cbc.ca/news/canada/ottawa/st-james-church-building-in-gatineau-damaged-by-fire-1.2608674
The 113-year-old building St. James Anglican Church in Gatineau was engulfed in flames, but the fire was contained to the church lobby.

Talk about the early African Nova Scotia experience planned in Wolfville
http://www.kingscountynews.ca/Living/2014-04-10/article-3681450/Talk-about-the-early-African-Nova-Scotia-experience-planned-in-Wolfville/1
Karolyn Smardz Frost gave a talk to the Wolfville and Area Historical Society entitled Black Loyalists: the Early African Nova Scotia Experience in King's County. Between the founding of Halifax and the end of the American Revolutionary War, at least 600 people of African descent were brought to Nova Scotia.

From Paris auction block to B.C. First Nation's museum, rare artifact comes home http://www.vancouversun.com/technology/From+Paris+auction+block+First+Nations+museum+rare+artifact/9719573/story.html
The Chilkat ceremonial blanket was recently discovered on the auction block in Paris and was purchased by the U'mista Cultural Society with a $27,368 grant from Canadian Heritage. Made some time between 1865 and 1871, the blanket is now on display at the U'mista Museum in Alert Bay, on the northern tip of Vancouver Island.

Western Development Museum celebrates 65 years of living history. WDM uses modern methods to keep history alive.
http://cjme.com/story/western-development-museum-celebrates-65-years-living-history/306125
What started off as a museum in a airport hanger has since grown to four locations in North Battleford, Saskatoon, Yorkton, and Moose Jaw.

Ukrainian Catholic Church in Canada Burnt to Ashes, No Injury Reported
http://au.ibtimes.com/articles/546844/20140407/ukraine-catholic-church-burnt-ontario-canada-toronto.htm
A Ukrainian church was burned to ashes due to a two-alarm fire in Ontario, Canada. The Catholic Church, which was completely destroyed due to the fire, was situated on Heritage Road north of Bovaird Drive West in Brampton, outside Toronto.

Historic building in Halifax being torn down for new condos
http://www.theglobeandmail.com/news/national/historic-building-in-halifax-being-torn-down-for-new-condos/article17840515/?cmpid=rss1
Everyone who has lived in Halifax has at one time or another has been in the Roy Building on Barrington Street, and now the 120-year old building is being town down to make way for a new condo.

What really happened to the Bell of Batoche
http://www.cbc.ca/news/aboriginal/what-really-happened-to-the-bell-of-batoche-1.2605937
Researchers at the Canadian Broadcasting Corporation (CBC) have uncovered the story of the real Bell of Batoche.

Montrealer wants national day for Terry Fox on April 12. Eddy Nolan wants federal recognition for the day Fox launched his historic Marathon of Hope in 1980 http://www.cbc.ca/m/touch/canada/montreal/story/1.2608744
Do you realize that Terry Fox ran the equivalent of a full marathon every day for 143 days. He completed this before his cross-Canada trek was cut short by the return of his cancer near Thunder Bay, Ont. He died nine months later on June 28, 1981, at the age of 22. 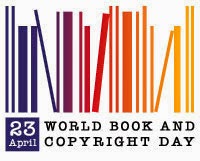 World Book and Copyright Day is an annual event, celebrated all around the world to promote reading and the cultural aspects of books. It is celebrated on April 23rd.

You would be well-advised to read Dr. Margaret Ann Wilkinson's (Canada’s answer to genealogy and the law) article, Recent Developments in Canadian Law Affecting Genealogists, in the May 2014 issue of Families, the journal of the Ontario Genealogical Society (OGS).

She gives a full explanation of Canadian law as it pertains to privacy and copyright for other people’s work, and for your own work, as you put family trees in software and on the Internet.

If you are not a member of the OGS, you may be able to access this article at your local genealogical society library, or you can contact the OGS at https://www.ogs.on.ca/membership.php to see if a half-year membership could include this issue of Families.

The International Edible Book Festival
http://www.books2eat.com
Here is an interesting idea to try. Make a book and then eat it! You make a “book cake”, decorate it as you wish, and then celebrate Canada’s Book and Copyright day by toasting your accomplishment, and then eating a piece of cake. And, of course, read a good Canadian genealogy book that day!

Reminder: Check the Canadian Week in Review next Monday for the latest in Genealogy, Heritage, and History news in Canada. It’s the ONLY news blog of its kind in country! The next post will be on April 28, 2014.
Posted by Elizabeth Lapointe at 12:30 AM No comments: Links to this post