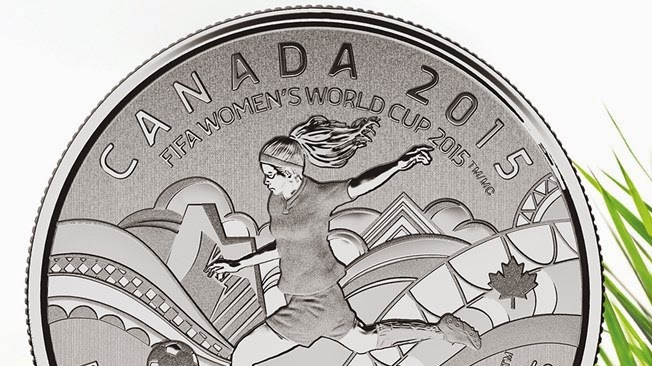 There will soon be a series of collector coins commemorating the FIFA Women's World Cup Canada 2015™ produced by the Royal Canadian Mint. The coins will be available approximately two months before this summer's opening match, with fine silver and pure gold coins included in the collection.
The coin collection will include -
This summer's FIFA Women’s World Cup Canada 2015 commences on 6 June with the opening match in Edmonton, Alberta. The 52-match finals will be played from coast to coast across Canada, with matches in: Vancouver, British Columbia; Edmonton, Alberta; Winnipeg, Manitoba; Ottawa, Ontario; Montreal, Quebec; and Moncton, New Brunswick.
To go to the Royal Canadian Mint, go to  http://www.mint.ca/store/template/home.jsp

It’s the ONLY news blog of its kind in Canada!
It has been a regular post every Monday morning since April 23, 2012.


Posted by Elizabeth Lapointe at 9:00 AM No comments: