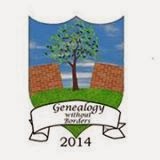 Niagara Branch of the OGS is host this year to the 2014 Conference whose theme is Genealogy Without Borders . It will be held May 1 to May 4, 2014 at Brock University, St. Catharines, Ontario.

They have just released who they will have as speakers and the schedule, and it is quite an impressive group, such as -

Chris Paton, the Scottish Genealogist will conduct workshops, and will give the Houston Lecture Genealogy Without Borders-Technology on Friday evening.

Hank Jones will be the keynote speaker on Saturday evening  when he gives the talk
How "Psychic Roots" became an "Unsolved Mystery".

To see the rest of the speakers, go to http://www.ogs.on.ca/conference2014/speakers_info/Conference%202014%20Schedule.pdf

You can also go to the Facebook page at https://www.facebook.com/NiagaraPeninsulaBranchOgsConference2014

Like the organizers say "Genealogy Without Borders" is genealogy research that does not require a passport!
Posted by Elizabeth Lapointe at 6:22 AM No comments: