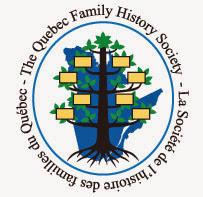 There are a number of societies in Canada now that offer half-year memberships. I believe that the thinking behind this is that people will want to try a half-year membership, and if they find it useful, then maybe they will try a full-year membership next time. Remember, this special deal is usually open to new members only.

This membership will provide you with a copy of the Summer 2015 issue of their newsletter, Connections, and full member's access to their website. Also, they invite members and non-members alike (free for members) to go to their research library in Montreal to access their many books, and use special genealogy searching programs.

To join, click on the membership form below. After printing and completing the form, you can mail it to them, along with your cheque or money order for $40.00.

The membership form is at http://www.qfhs.ca/upload/files/Special_Membership_Form_2015(1).pdf

*Their membership year runs from August 1 to July 31. Payment received after May 31 will apply to the next membership year, beginning August 1st. For an individual, the membership costs $75.00 per year for one person, or for two people living at the same address.

There has been a regular post every Monday morning since April 23, 2012.
Posted by Elizabeth Lapointe at 2:30 PM No comments:

Jay Young, Outreach Officer at the Archives of Ontario (AO), says that the archives has a new online exhibit entitled Eaton’s Goes To War, which shows the contributions made by the T. Eaton Company and its employees to the war effort during the First World War.

Soon after war broke out in 1914, Eaton’s contributed an unprecedented amount to Canada’s war effort. The company announced that all military contracts it received would be delivered at cost, and it even paid the salaries of enlisted employees for the duration of their service, in addition to their military wages.

In total, 3,327 Eaton’s employees across Canada enlisted, with 2,200 from the Toronto store alone.

The press release says that ‘Each time an enlistee employed at Eaton’s Toronto location was shipped overseas, a portrait was taken of him to be displayed prominently in the store. More than 2,000 of these portraits—part of the T. Eaton Company records at the Archives of Ontario—are featured in the exhibit. The faces of these men show an intimate side of the war.

These photographs are an excellent resource for genealogists who are researching their family history in Toronto. In particular, the exhibit allows users to view a list of names of Eaton’s enlistees and their portrait. You might discover that someone in your family was an “Eatonian” – an enlistee employed at Eaton’s.

Eaton’s Goes To War also asks users to contribute their own stories of ancestors who worked for Eaton’s during the 1910s. These stories will help to show how Eaton’s had a personal impact on Ontarians during the Great War.

To view the exhibit, go to http://www.archives.gov.on.ca/en/explore/online/soldiers/remembrance_day.aspx