Wayne Macvicar, from Cape Breton (Nova Scotia), has emailed that
his site - Cape Bretoners in World War Two has just gone through an update.

The site contains an additional 16 individuals for a total of 16, 077 and 261 new pages for fatal casualties in the period Jan-Jul 1944, with photos for 19 individuals that are not on the Canadian Virtual War Memorial site.

He says that “Although I feel I'm getting close to completing the number of individuals that served I only have the bare information for many of them, including those that died in service. I invite everyone to have a look at my site and if they have any information they would like to share to fill out the form I have provided on my general Cape Bretoners at War https://sites.google.com/site/cbatwar/ site”.

To visit his sites, go to Cape Bretoners at War: https://sites.google.com/site/cbatwar/ and

Wayne thanks you for your input. It is very much appreciated. 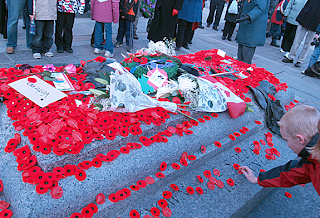 Thank a Veteran by sending a Postcard for Peace at http://www.veterans.gc.ca/eng/remembrance/veterans-week/postpeace

Posted by Elizabeth Lapointe at 7:30 AM No comments: