Saturday was a Treat!

We were in for a treat last Saturday when we attended the annual FHC Genealogy Fair at their location on Prince of Wales Drive near Dow's Lake and the Experimental Farm. The website for the Family History Center in Ottawa is <www.OttawaStakefhc.on.ca>.

The treat turned out to be a dual presentation by Ottawa genealogists Glenn Wright (BIFHSGO member) and Lesley Anderson (with Ancestry.ca) on the Canadian Census.

They made the comment that they didn't think it had been done before - and I honestly don't think it has. They have taken a rather dull subject and have turned it into something fun and interesting - and if they present it again (which I hope they will), you should not miss it.

As Glenn and Leslie pointed out, census have been taken in Canada since 1666! They went through the history of the census as it was in Canada, paying special attention to the censuses since 1871 - the first national census in Canada.

The 1871 Canadian Census is still complete at the Library and Archives Canada (it wasn't discarded after it was microfilmed), and it has many different schedules of interest (e.g. the agricultural and industrial census is attached).

They stopped and looked at the 1906 and 1916 censuses of Western Canada (Manitoba, Saskatchewan, Alberta) and noticed how complete they are - they are on Ancestry.ca.

In the 1916 census, it has who was away on the First World War overseas, and people were asked the country of their birth to make sure the government was keeping track of immigration.

The 1911 Canadian Census was the last one made public before the next census of 1921 (which is due to be made public in 2013 - 92 years after it was taken) is also on Ancestry.ca. It is the year when people were asked what year they came to Canada - again, to keep track of immigration.

Leslie said that all Canadian census will be on the Internet at Ancestry.ca next month - the 10th of June.

I spent my break times answering questions on the Loyalists who came to Canada because I am descendent for them on both sides of the family, and also answered questions about the Ontario Genealogical Society because I am their newsletter editor.

Therefore, I didn't have time to go to the "cultural room" to see who was there at the table, although my husband went there, and said that BIFHSGO and the City of Ottawa Archives were there, to name a few.

It was time very well-spent, and Shirley Ann Pyefinch and her group are to be congratulated for putting together another successful fair, and for making us feel at home. 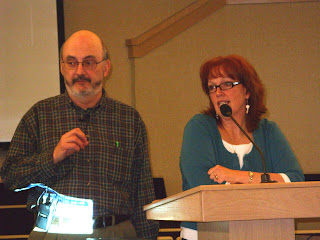 They should go "on the road" with their presentation, which they gave Saturday at the FHC Genealogy Fair in Ottawa.