In 1793, General John Graves Simcoe, lieutenant-governor of Upper Canada, began clearing land for the site for the city of York. Why is that important? Because today, York is known as Toronto, the capitol of Ontario. Worried about a possible war with the Americans, Simcoe moved the capital from Newark, Niagara, to the Toronto Bay area.

For further information, go to https://en.wikipedia.org/wiki/York,_Upper_Canada 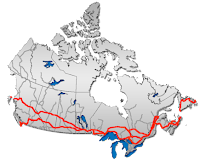 In 1962, Prime Minister John Diefenbaker officially opened the Trans-Canada Highway to traffic at ceremonies at Rogers Pass, British Columbia. The opening of the 7,821-km road, the longest national highway in the world, meant Canadians could drive directly from St. John's, Newfoundland to Victoria, British Columbia.

To read more about the Trans-Canada Highway, go to https://en.wikipedia.org/wiki/Trans-Canada_Highway

A Gatineau woman is fighting to get her child's name changed to recognize the baby's father, who died of flesh-eating disease before the little girl was born.

Rockton's Westfield Heritage Village to receive $42,214 from Canada 150 fund
http://www.flamboroughreview.com/news-story/5764861-rockton-s-westfield-heritage-village-to-receive-42-214-from-canada-150-fund/
On Tuesday, Ancaster-Dundas-Flamborough-Westdale MP David Sweet, on behalf of Minister of the Federal Economic Development Agency of Southern Ontario Gary Goodyear, announced more than $847,000 in funding for six projects, including three in Flamborough.

Bringing history to life at Lost Villages
http://www.standard-freeholder.com/2015/07/28/bringing-history-to-life-at-lost-villages
Fundraising efforts are underway to build a first-ever National War Monument dedicated to Canadian soldiers who fought along-side Americans during their Civil War. President of the Lost Villages Historical Society Jim Brownell said the monument will be the first of its kind in Canada and will be prominently displayed at the Lost Villages.

Military museum offers a glimpse at history
http://www.sunnysouthnews.com/uncategorized/2015/07/28/military-museum-offers-a-glimpse-at-history/
One way for military history to be preserved is to ask for pictures or artifacts passed down from generation to generation from family members throughout the county, southern Alberta, the province, the country and across the globe. The Lethbridge Military Museum does just that - it preserves the stories of veterans.

This year’s conference, The Main Thing follows on the national Heritage Week theme promoting main streets as an vital part of heritage conservation and economic stimulation.

Fort Conger, historic High Arctic fort, to be preserved in 3D
http://www.cbc.ca/news/canada/north/fort-conger-historic-high-arctic-fort-to-be-preserved-in-3d-1.3173750
A historic fort threatened by melting permafrost in one of the most remote locations on Earth might be preserved thanks to 3D technology.

Fort Conger on Ellesmere Island was established in 1875 by British explorers looking for the North Pole.

An abbreviated version of Canadian Week in Review (CWR) has been produced this week due to vacation. I will return from vacation the 11 of August.

Check the Canadian Week in Review (CWR) every Monday morning for the latest in Genealogy, Heritage, and History news in Canada.
If you missed last week’s edition, it is at
http://genealogycanada.blogspot.com/2015/07/canadian-week-in-review-cwr-27-july-2015.html

It’s the ONLY news blog of its kind in Canada!
Posted by Elizabeth Lapointe at 12:30 AM No comments: