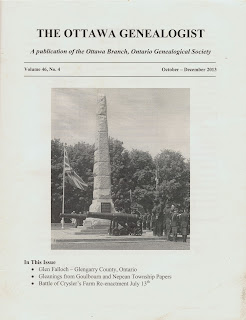 The Ottawa Branch of the OGS has released its issue of The Ottawa Genealogist, and this issue contains an article on a local settlement, and an article on a re-enactment that took place this summer at a local destination.

In the Glen Falloch – Glengarry County, Ontario article, there is a history of the settlement, plus two maps of the Glengarry County, a family tree of Donald MacAruthur, and there is also the Ancestors of John Gould (who left the area in 1912 to farm in Alberta).

There is an article called Gleanings from Gouldbourn and Nepean Township Papers in which there are hundreds of names, and land which they owned!

And there are pictures and article of the Battle of Crysler’s Farm Re-enactment July 13th at which Edward Kipp, the editor of The Ottawa Genealogist covered.

At their meeting they will hear Andrew Jeanes talk about Freiman’s Santa Claus Train.

And don’t forget if you are a member, you can listen to the meeting at home by listening to the simulcast.

For more information, go to http://ogsottawa.on.ca/

Postscript: December is membership month at the OGS. For the yearly rate of $61.20 plus 15.00, you can join the provincial society plus the Ottawa Branch.


Posted by Elizabeth Lapointe at 12:30 AM No comments: