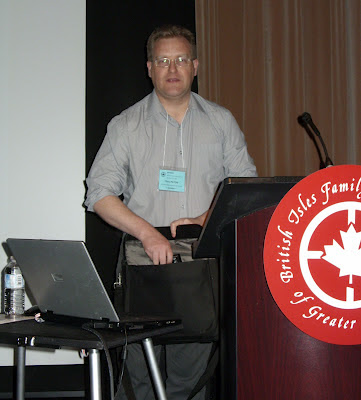 Ttwo beautiful mornings (Saturday and Sunday, September 15th and 16th) greeted us as we made our way to the Library and Archives Canada in Ottawa to hear Chris Paton give four lectures (two lectures each day) on Scotland. He had also given workshops the day before which, unfortunately, I was unable to attend.

The first lecture was an introduction to “Researching Scottish Family History”, and Chris took us though Civil Registration, Decennial Censuses, Parish Records pre-1855, Wills and Testaments, Where People Lived, Newspapers, Books, and Courses.

Since my ancestor was Scottish (BARCLAY), and was born in 1738, I took particular interest in the records of Scotland pre-1855.

The second lecture was on the “Scottish House and Land Records” and, through his lecture, we learned that Scotland was under the feudal system up until 2004.

He went through all of the available land records and explained the terms so that land records could be more easily researched.

Besides giving a timeline of the development of the Church, he told us how to search the records, and the biographical details of the ministers.

The fourth and final lecture given by Chris was called “The Mount Stewart Murder”, in which he talked about the murder of his 3x great-grandmother, Janet (nee Henderson) Roger, who was killed in 1866.

The murder has never been solved, and Chris took us through a list of “possible suspects” of who could have the murderer.

His talks were easy to follow because his hand-outs were very well-organized, and we were given them before the lecture. He stayed behind and answered many, many questions, and was very approachable during the times when he wasn’t giving a lecture.

It was a very successful conference for Chris – he completely sold out of his books!

Go to his blog, British GENES (British Genealogy News and Events) http://britishgenes.blogspot.co.uk/2012/09/bifhsgos-2012-conference-report.html, to read his report on the conference in Ottawa, and the nice words he said about my booklet on the War of 1812 - "an absolute gem"!

There are interviews with Chris, Lucille Campey, and Patricia Whatley by Austin Comerton on Ottawa's radio show, The Gaelic Hour (CJLL 97.9 FM) www.thegaelichour.ca. To listen to the interview, click here www.thegaelichour.ca/20120916.m3u.
Posted by Elizabeth Lapointe at 6:00 AM No comments: