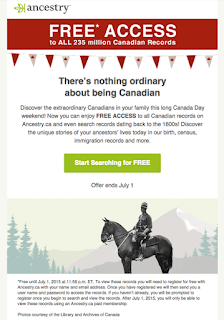 It is Canada's birthday on July 1st, and Ancestry.ca will be FREE until Midnight July 1st ET.

And that is FREE access to all Canadian records.

You will need to register for free with Ancestry.ca with your name and email address.

Once registered a user name and password will be sent by email.

After July 1, 2015, you will only be able to view these records using an Ancestry.ca paid membership.

If you missed this week’s edition, it is at http://genealogycanada.blogspot.com/2015/06/canadian-week-in-review-cwr-29-june-2015.html

Posted by Elizabeth Lapointe at 10:53 AM No comments: Links to this post

In 1774, the "Quebec Act" was passed by the British Parliament, establishing French civil law and the British system of criminal law in Quebec. As well, Roman Catholics were to have religious freedom. It also enlarged the province's borders to include Newfoundland and territory south of the Great Lakes.

For more information, go to https://en.wikipedia.org/?title=Quebec_Act 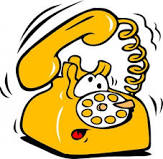 In 1955, the laying of a transatlantic telephone cable began at Clarenville, Newfoundland.

For more information, go to http://strowger-net.telefoniemuseum.nl/tel_hist_tat1.html 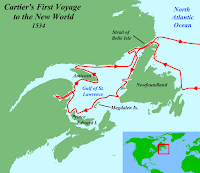 For information, go to https://en.wikipedia.org/?title=Jacques_Cartier

(Video) Timber! Crowd gathers to watch old mill implode in Saskatoon
http://www.cbc.ca/news/canada/saskatoon/timber-crowd-gathers-to-watch-old-mill-implode-in-saskatoon-1.3121465
It woke up the neighbourhood, if you were not already up to watch.
This morning, at least 100 people gathered on Saskatoon's west side to watch the 105-year-old Parrish & Heimbecker mill's demolition.

This series has examined the life of Samuel de Champlain, his accomplishments and the mysteries surrounding him. This final part looks at how we relate to him and what we can learn from his life.

Is it too late to save Canada’s national horse?
http://www.thestar.com/news/gta/2015/06/19/is-it-too-late-to-save-canadas-national-horse.html
There’s a common saying in the horse world: “A dog may be man’s best friend, but the horse wrote history.”
In the case of Canada’s national horse, this saying couldn’t be more true.
Yet as “le Cheval Canadien” celebrates its 350th anniversary this year, it’s pacing on the verge of extinction.

Heritage quilts documented at guild anniversary
http://www.wetaskiwintimes.com/2015/06/23/heritage-quilts-documented-at-guild-anniversary
This initiative focuses on quilts made before 1970 to preserve a little bit of history of the trade and Canadians. The documentation ran alongside the Millet Arts and Crafts Guild’s 35th Anniversary, whose members also participated in the documentation process

Footprints found on a remote B.C. island could be 13,000 years old — the oldest in North America
http://news.nationalpost.com/news/canada/footprints-found-on-a-remote-b-c-island-could-be-13000-years-old-the-oldest-in-north-america
Evidence of what could be the oldest footprints in North America has been discovered below the shoreline of a remote British Columbia island.

Are people using the DNA correctly?

I hear that it has become quite a concern to some genealogists that people are expecting their DNA test to tell them exactly where their ancestors are from, without verifying it with their paper records – a family tree. In fact, some people who have DNA done, don't even have a family tree. This is amazing, since the information sent with the DNA kit, tells you to consult and make a family tree!

They don’t ask - are my ancestors really from “x” place in England, for example. And in fact, some of these people don’t and will never make their paper records which would show them where their peoplr are from. They don’t see a need for it, now that DNA can answer all questions exactly who their ancestors were.

And then, to make it worse for themselves, they tell other people whose tree they may have seen on FamilySearch or at Ancestry, that they are their 5th cousin – only to find that they are in effect barking up the wrong tree.

It harkens back to the day, when people hooked themselves on to other people's tree if they thought they had the correct tree without doing the research.

So it all goes back to the old axiom, you must do your paper or computer family tree first, so that you can be sure that your ancestors are correct. Then, you can have your DNA done, and then proceed from there.

What would we do without Cyndi's List? How many time have I use it – too many times to count. If you are looking for places to research, it should be your first place to stop on the Internet.

For the Canadians site, go to http://www.cyndislist.com/canada/

For a while , I was using the Canadian version of Cyndi\s List, the Canadian Genealogy & History Links at http://www.islandnet.com/~cghl/index.php. It's has been almost 8 years since anything has been done to the list, but I still check it, especially the personal websites that are there.

And this week, we will celebrate the 148th birthday of Canada on July 1 and the National History Week from July 1st to July 7th.

Canada’s historical organizations, including museums, historical societies, and festivals, will be hosting activities during this week to get their communities involved in learning about our past.

I am taking the week off to go to Cornwall and Hawkesbury in eastern Ontario to do client research. All of my research notes are in order, the appointments have been made, the vet has been called, and the dog will be at “camp” that week while we are away. My husband and I will be in 'genealogist heaven' for the time that we are there!