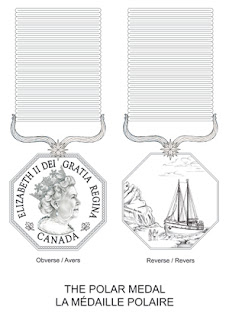 “Prime Minister Stephen Harper today welcomed the announcement of the creation of a Canadian Polar Medal. As Sovereign and font of all honours, Her Majesty Queen Elizabeth II has given her approval to this addition to the Canadian Honours System.

The Polar Medal will recognize individuals who have made extraordinary contributions to the Canadian North across a diverse range of endeavours.

The design of the new medal was released earlier today by His Excellency the Right Honourable David Johnston, Governor General of Canada. The medal program will be managed by the Chancellery of Honours as part of the Office of the Secretary to the Governor General, which is responsible for administering the Canadian Honours System”

The Polar Medal will celebrate Canada’s Northern heritage and recognize persons who render extraordinary services in the polar regions and Canada's North.

The call for nominations will start fall 2015

It’s the ONLY news blog of its kind in Canada
Posted by Elizabeth Lapointe at 12:30 AM No comments: Links to this post