The latest news from the Ontario Genealogical Society is -

"The newly formed Technical Support and Innovations Committee has launched a new forum on the OGS website. The Tech Forum is available to all OGS members and will provide a place to go to for Technical Advice and Support.

Whether you want to know more about a computer program you are using or what kind of equipment you should purchase for your branch this is the place to ask your questions. The answers will be provided by other members who have some experience or knowledge in the area you are looking for more information on.

It is hoped that this forum can also serve as a venue for members to suggest new ideas involving technology and how it can benefit the genealogical community.

To access the forum sign in to the Members Only section of the OGS website. The link to the Technical Support Message Board will appear in the green menu on the left hand side".

Steve Fulton
Technical Support and Innovations Committee
His email is tsic@ogs.on.ca
The website of the Ontario Genealogical Society is http://www.ogs.on.ca/
Posted by Elizabeth Lapointe at 11:58 PM No comments:

The Swedish American Genealogist has been put online, and it is now available to search for free of charge.

The "Swedish American Genealogist is a quarterly journal devoted to Swedish American biography, genealogy, and personal history. The journal was founded in 1981 by Nils William Olsson and is currently edited by Elisabeth Thorsell. This online collection is free to the public and contains issues published as recently as 2007. Newer issues and paper subscriptions are available from the Swenson Center".

There are many articles in the journal by Canadian and American genealogists covering the close relationship between the US and Canada as far as Swedish setters are concerned.

They ask you to note that "the digital version of the journal does not include Peter Stebbins Craig's copyrighted articles on New Sweden".

You are to contact the Swenson Center at sag@augustana.edu for information on how to access these articles.

It is online at http://collections.carli.illinois.edu/cdm4/index_aug_sag.php?CISOROOT=/aug_sag
Posted by Elizabeth Lapointe at 2:28 PM No comments: 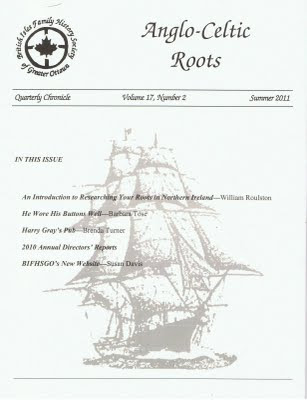 The Summer 2011 edition of Anglo-Celtic Roots has just been issued, and it contains the 2010 Reports which were given at the AGM in June meeting as well as papers written by various members.

The second article is He Wore His Buttons Well by Barbara Tose in which she relates the true story of the SS Antinoe, a freighter which was carrying wheat from New York to Ireland when she ran into a storm in the Atlantic off of the coast of Halifax, Nova Scotia. The story in interesting because her great-uncle Harry Tose was the captain of the ship.

The last paper in this issue is Harry Gray's Pub by Brenda Turner in which she talks about finding out the story behind a pub that her uncle Harry used to own in London during the Second World War. She describes the help she got from the Guildhall, and the experiences her uncle witnessed during the war.

You may contact BIFHSGO by going to http://www.bifhsgo.ca/
Posted by Elizabeth Lapointe at 9:30 AM No comments: