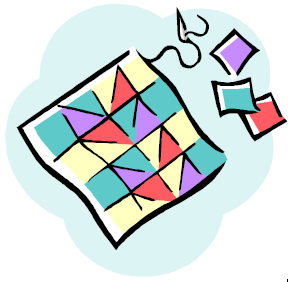 Do you have a 50 plus-year-old quilt or quilts at home, and would like to have it or them documented?

The Fort Heritage Precinct at Fort Saskatchewan, Alberta is hosting a public Quilt Documentation Day this Saturday, Sept. 24 from 10 a.m. to 4 p.m. at the Kinsmen Room at the Canadian Northern Railway Station. Appointments are required and only pre-1970 quilts will be considered.

The intention is to document and photograph the quilts in order to preserve their history and contribution to Alberta’s quilting history.

The quilts will be registered, photographed and examined by a Royal Alberta Museum quilt expert. The expert will then be able to document the quilt in a personal history station.

Does anyone know if we do this in the rest of the country? I personally have never heard of it, but it is quite possible that we do this sort of thing through historical societies. If you know the answer, please leave your it in the comments section.Thanks.

Check the Canadian Week in Review (CWR) every Monday morning for the latest in Genealogy, Heritage, and History news in Canada.If you missed last week’s edition, it is
at http://genealogycanada.blogspot.com/2015/09/canadian-week-in-review-22-september.html
It’s the ONLY news blog of its kind in Canada!
Posted by Elizabeth Lapointe at 2:47 PM No comments:

The Canadian War Museum is ranked #3 best in Canada!

The Canadian War Museum is proud to be recognized once again by TripAdvisor as one of the best museums in the country, ranking third among the top 10 museums in Canada for the second year in a row. The annual Travellers’ Choice awards highlight the top 1 percent of attractions in the world, based on the quantity and quality of visitors’ reviews over a 12-month period.

“We are pleased that so many visitors to the Canadian War Museum enjoy their experience enough to take the time to leave positive comments on TripAdvisor,” said Stephen Quick, Director General of the Canadian War Museum. “We are proud to be consistently ranked as one of Canada’s most highly recommended museums, and we will continue to produce the exceptional exhibitions and programming that make this a must-see attraction.”

And the good news doesn't end there.

Dr. Tim Cook, an esteemed historian at the Canadian War Museum, received The Order of Canada, one of our country’s highest civilian honours this past Wednesday.

Tim Cook has worked at the museum since 2002, and he has been curated the First World War permanent gallery and other exhibits. He also teaches at Carleton University, and has authored seven books, many of them award-winning, including Warlords, The Madman and the Butcher, Shock Troops, At the Sharp End, Clio’s Warriors, and No Place to Run.

His newest book, The Necessary War, is the first volume of a two book set to explore Canada in the Second World War. The second volume, Fight to the Finish, will be published this year.

A heartfelt congratulations to both the museum and Tim Cook. Through their work, out nation is richer from knowing and honouring the sacrifice that our county men and women have made (and continue to make) over the years in defending Canada.

Also, Peter Milliken, retired MP and longest-serving Speaker of the House of Commons, and the Patron of the Ontario Genealogical Society (OGS) also received the Order of Canada on Wednesday.

Check the Canadian Week in Review (CWR) every Monday morning for the latest in Genealogy, Heritage, and History news in Canada.If you missed last week’s edition, it is
at http://genealogycanada.blogspot.com/2015/09/canadian-week-in-review-22-september.html
It’s the ONLY news blog of its kind in Canada!
Posted by Elizabeth Lapointe at 8:18 AM No comments: