As I promised my blog on 06 January 2014 at http://genealogycanada.blogspot.com/2015/01/beginning-genealogy-study-group.html, I watched Dear Myrt’s Beginning Genealogy Session 6 and 7 yesterday. I will continue to watch the rest of the study group as it proceeds.
The top two things that were discussed in Sessions 5 and 6 were -
The website for Session 7 is at https://www.youtube.com/watch?v=JqS2BCu5IQU

Posted by Elizabeth Lapointe at 4:00 PM No comments: Links to this post 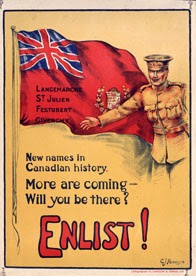 The Library and Archives Canada (LAC) has put pictures of the First World War soldiers stationed at Valcartier Camp, Quebec on Flickr. The LAC says that -
‘With a small army of approximately 3,000 soldiers, a small navy, and some militia units, Canada was able to enlist about 35,000 men in a matter of a few months. They were stationed at Valcartier Camp situated northwest of Québec City for initial training and formed into battalions of the Canadian Expeditionary Force, and into a division—the 1st Canadian Division.
Comprising 31,000 men, the Division was sent overseas by convoy for further training at Salisbury Plain in England where it continued training through the winter of 1914, and was finally sent to France in February 1915’.
To see the pictures, go to https://www.flickr.com/photos/lac-bac/sets/72157650216555548/

It’s the ONLY news blog of its kind in Canada!
It has been a regular post every Monday morning since
April 23, 2012.
Posted by Elizabeth Lapointe at 12:30 AM No comments: Links to this post