It's hard to believe, but the Canada Genealogy Centre (GCG) is already five years old!

It was on March 29, 2003——a cold windy Saturday——that I bundled up and went out to Nepean (now Ottawa) to see the launch of a new genealogy site at the Library and Archives Canada (LAC).

Today, there are 20 databases online, the two newest being the Chinese Immigration List and the 1881 Census.

In fact, it is so popular that it is the second-leading website among the federal government sites - a close second to the weather website!

They also have online "That's My Family", developed in partnership with the Bibliotheque et Archives nationales du Quebec and Ancester Search.

According to John Reid's blog, the hardcopy of the 1916 Census for the Western Provinces has just arrived at the LAC, and is now in the CGC Microfilm Consultation Room. The index of the census is being done by Ancestry.com.

These days, 60 percent of visits to the LAC are to the CGC.
Posted by Elizabeth Lapointe at 9:30 PM No comments:

The August 2008 NewsLeaf is here! It was delivered last week to my mailbox and it looks good.

The NewsLeaf is the Ontario Genealogical Society's (OGS) four times a year publication of news about the society which one receives if a member of the society <www.ogs.on.ca>.

In this issue are articles on the Irish Palatines, Finding Cousins, and Ontario Vital Records.

As well as the articles, there are the usual, as in Branch addresses and Branch meetings and what is going on in the Halton-Peel Branch for next year's conference to be held in Oakville (near Toronto) next year from May 29-31, 2009 <www.ogs.on.ca/conference>.

My opinion is rather biased because I am editor of it, as well as being the editor of its electronic sister publication, e-NewsLeaf, also only available to the members of the OGS.

The e-NewsLeaf is sent out by email, or is available onsite, eight times a year (January, March, April, June, July, September, October, December).

Meanwhile, the print NewsLeaf is available February, May, August and November.

Both are full of news about what is happening at the OGS. If you want to know when the next meeting is, or what plans the society has for an upcoming event, be sure to check the NewsLeaf or the e-NewsLeaf.

The Ontario Genealogical Society is the largest society in Canada. It will celebrate its 50th anniversary in 2011.
Posted by Elizabeth Lapointe at 7:43 PM No comments:

"The Last Hundred Days" of WWI

Do you know that on November 11th, Canada will mark 90 years since the First World War ended?

More than 100,000 Canadians fought in that war and this year, the period from August 8th to the signing of the armistice on November 11th will be called "The Last Hundred Days."

Prime Minister Stephen Harper said in a statement (08/08/08) that "Over 'The Last Hundred Days', Canadian soldiers advanced 130 km and 30 Canadians and Newfoundlanders earned the Victorian Cross."

If you are searching for your WWI ancestor, the best place to start your search is at the Canadian Genealogy Centre at <www.collectionscanada.gc.ca/022/022-909.006-e.html>.

There you will see the 600,000 personal records of Canadians who enlisted in the Canadian Expeditionary Force (CEF).

If you enter the last name and the first name of your ancestor in the search engine, you will see the actual enlistment papers that your relative signed - the enlist papers that got him into WWI.

Also on the site is a section devoted to the Aboriginal Soldiers, the Royal Newfoundland Regiment and Newfoundland Forestry Corps, the Air Force and the Navy. (Some of these files may not be online - check with the LAC first to see if they are, or have to be, borrowed since they would be on microfilm.)

If you would like, you can also go to the Veterans Affairs Canada <www.vac-acc.gc.ca> site for information about the graves and memorials of the 116,000 Canadians and Newfoundlanders who died.

The site contains digital images of photographs and personal memorabilia about individual Canadians.
Posted by Elizabeth Lapointe at 7:27 PM No comments: 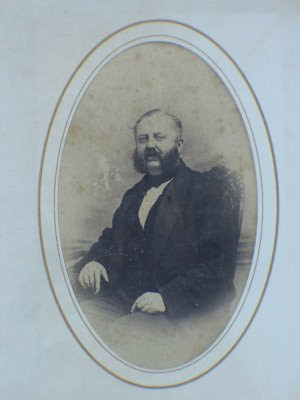 It one of the subtitles in the handout piece of Jeffrey Bockman I received Wednesday when I heard him speak at the "Genealogy and Local History" conference in Ottawa last week.

And it had a direct application for me because when I checked my email Wednesday night after I got home, there was a note from a man, Peter Budgell in Burlington, Ontario, telling me that he had a picture of Andrew BARCLAY (1814-1866).

I have been searching for my g-g-g-uncle for a number of years - six years, in fact!

Peter finally answered my email query with a picture. It was more than I could have hoped for - and there was Andrew right in front of my eyes! He had gotten the picture from his Mom's aunt, and there he was - Andrew!

(He was the son of James Barclay, the grandson of Andrew Barclay who worked in Shelburne, Nova Scotia. Around 1860, he and his two sons left Shelburne and went to the West Indies, where he and his son died of yellow fever. His youngest son left for New York.)

And this morning I received another email from Peter saying that there still is material I haven't ime to digest.

The sons and daughters of Andrew——so sketchy in the book that I have almost finished on the progenitor Andrew BARCLAY——will now be just a little closer to getting done.

So Jeffrey Bockman was right when he said, "Let Cousins Find You", for, as he added, "Passive Genealogy can be very helpful".
Posted by Elizabeth Lapointe at 8:39 PM No comments:

The people who first got the news were the attendees at the International Federation of Library Associations and Institutions (IFLA) who were at the Library and Archives Canada attending a conference on Genealogy and Local History. I was one of the attendees.

On the database, researchers can access the name, age, country or province of birth, nationality, religion, and occupation of Canada's residents at the time of the 1881 census. It also has the actual census return itself, which you can also access.

I checked the census Thursday evening for the BARCLAY (my direct line) family in Nova Scotia and I found them, but I found the children in one grouping and the mother and father in another grouping. Funny - but that is how it was.

Also, their surname was spelled as BARCKLAY - which was also unusual.

Sylvie Temblay, the Chief Project Head at the Canadian Genealogy Centre, expects 750,000 searches per week on the 1881 census.

The index was created by familysearch.org, and access to the digital images of the original census was work done by the Library and Archives of Canada.

The database is available at <www.collectionscanada.gc.ca/databases/census-1881>.
Posted by Elizabeth Lapointe at 6:45 PM 1 comment: