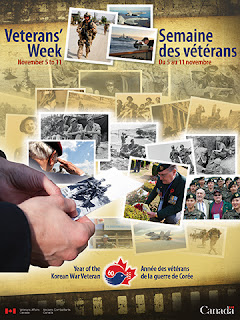 © Her Majesty the Queen in Right of Canada, represented by the Minister of Veterans Affairs, 2013

Today is the beginning of Veterans Week in Canada. This year’s theme is I Remember – Canada's Veterans, Brave and Proud.

They have an Honour Roll at their page at
http://www.veterans.gc.ca/eng/collections/virtualmem/honour-roll

Yesterday, they honoured 281 people who died in war on that date, and each person has burial information, a photo of the soldier if it is available, and a summary of their military service.

‘Give a Vimy for Vimy:’ Fundraising campaign highlights battlefield image on $20 bill http://www.canada.com/Give+Vimy+Vimy+Fundraising+campaign+highlights+battlefield+image+bill/9119175/story.html Montreal-based Vimy Foundation is launching “a centennial campaign to convince the country to adopt the nickname “Vimy” for the new polymer $20 bills, which feature an image of the towering Vimy Ridge battlefield memorial in France”.

Libraries and Legion work together for literacy this Remembrance Day http://www.ngnews.ca/News/Local/2013-10-01/article-3413507/Libraries-and-Legion-work-together-for-literacy-this-Remembrance-Day/1In order to promote Remembrance Day this year, the Legion and the libraries in Nova Scotia are giving away 6,000 copies of Norman Leach’s award winning book Passchendaele,an illustrated history.