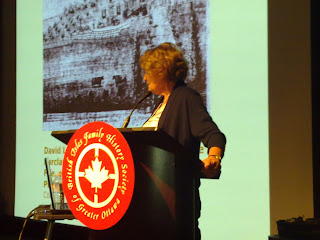 On Saturday and Sunday, September 15th and 16th, I attended the British Isles Family History Society of Greater Ottawa's Conference, and heard Ottawa native, Dr. Lucille Campey, give three talks about emigration from the British Isles to Canada.

Since I am deeply interested in emigration, I had waited impatiently since first hearing that she was coming to speak at the conference, so I had to make sure that I did not miss any of her talks.


The first talk was “Lord Selkirk and the Settlement of Scottish Highlanders in Canada”, and Lucille says that he is a favorite of hers to write about because he had such a strong personality, and such a commitment to bring Scottish Highlanders to Canada to settle in Red River, Manitoba; Baldoon (Wallaceburg), Ontario; and Belfast in Prince Edward Island.


Her next talk on Sunday was “Seeking a Better Future: The English Pioneers of Ontario and Quebec” in which she challenged the commonly-held idea that people were running from poverty in the homeland. She found out in her research that the English came to Canada seeking greater freedoms and a more attractive style of life than they could find at home.

Her third talk, “The Scots in Ontario – a New Look at the Data”, looked at Ontario census data to explain why Scottish people settled in the area where they settled. She showed genealogists why people such as weavers and kelp farmers settled in particular areas in Ontario. It was an interesting talk for me because it showed the patterns of settlement, and the reasons why people settled in one area, and not in another.


You should check out her books on emigration at Dundurn Press http://www.dundurn.com/authors/lucille_h_campey, and the interviews that were done with her by BIFHSGO at www.bifhsgo.ca/upload/files/Conference%202012/Campey.mp3 In addition, there is an interview with Lucille Campey, Chris Paton, and Patricia Whatley by Ottawa's Austin Comerton on his radio show, The Gaelic Hour (CJLL 97.9 FM) www.thegaelichour.ca. To listen to the interview, click here - www.thegaelichour.ca/20120916.m3u