Poster contest draws on military history http://lethbridgeherald.com/news/local-news/2013/12/poster-contest-draws-on-military-history/ Read about how the entrants are down this year in the student poster contest for Remembrance Day at the Lethbridge Legion, Alberta.

St. Louis: Ship of Fate exhibit at Museum of Industry http://www.ngnews.ca/News/Local/2013-12-06/article-3532713/St.-Louis%3A-Ship-of-Fate-exhibit-at-Museum-of-Industry/1This exhibit tells of the St. Louis, a ship of Jewish refugees from the Second World War who were not allowed to enter into Canada.

Local’s search for family history leads to university degree at age 76 http://www.lucknowsentinel.com/2013/12/04/locals-search-for-family-history-leads-to-university-degree-at-age-76 This article is about Carolyn Helfenstein, the editor of The Teeswater News from Bruce County, Ontario who went to university to earn her diploma at age 76. Her thesis was called “In Search of an Identity,” which she intends to turn into a book called “Rock Solid: The people of Newfoundland.”

Rose Murray updates classic Christmas cookbook with more history, new recipes http://www.brandonsun.com/lifestyles/breaking-news/rose-murray-updates-classic-christmas-cookbook-with-more-history-new-recipes-234464131.html?thx=y With so many cookbooks out at Christmas, it’s often hard to choose which one to buy, but here is one that combines Canadian history and cooking.

Harrietsfield man helps re-create history http://globalnews.ca/news/1005211/harrietsfield-man-helps-re-create-history/ Global News reports that Blair Higgins is the president of Loyalist Arms and Repair, a company in Harrietsfield (outside of Halifax) that specializes in recreating historical props inspired by the 17th or 18th century.

More bones found during Queen Street road work. Workers stumbles on old Methodist cemetery, an early 19th century burial ground http://www.cbc.ca/news/canada/ottawa/more-bones-found-during-queen-street-road-work-1.2455001This is the third finding on human bones under Queen Street since September. People think they are connected to the 19th century Methodist Cemetery that once was on the site. 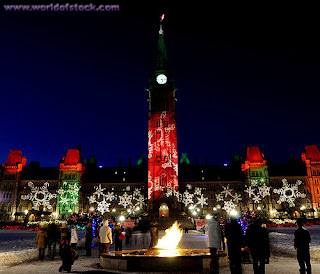 For the past 29 years, Ottawa has led to country in the Christmas Lights Across Canada.

As in past years the official illumination ceremony took place on Thursday, December 5, 2013 at 6 p.m. on Parliament Hill and was hosted by Benoit Huot, Paralympic gold medalist, and Jean-Luc Brassard, Olympic gold medalist and Assistant Chef de Mission of the Canadian Olympic Team for Sochi 2014

They were joined The Honourable Shelly Glover, Minister of Canadian Heritage and Official Languages, and a representative of Manulife Financial.

Adding to the festive mood of the evening, the celebration included performances by the Dunlop Public School Choir and Big Soul Project, a community gospel and groove choir.

The ceremony was broadcasted live on Rogers TV, Cable 22, in Ottawa, and an edited version will be re-broadcast throughout the holiday season on community cable stations across Canada.

Those in attendance were invited to indulge in some favourite winter treats: BeaverTails® pastries, hot chocolate and roasted marshmallows (free while supplies last).

Reminder: Check the Canadian Week in Review next Monday for the latest in Genealogy, Heritage, and History news in Canada. It’s the ONLY news blog of its kind in country! The next post will be on 16 December 2013.
Posted by Elizabeth Lapointe at 12:30 AM No comments: