On June 2, in 1866, Canadian militia units panicked and lost the "Battle of Ridgeway" after 700 Fenians attempted an invasion of the Niagara Peninsula.

Do you know which was the first letter of the alphabet that was sent by Guglielmo Marconi across the Atlantic from Cornwall, England to a receiving station in St. John's, Newfoundland?

It was sent across the Atlantic in 1901, because in 1897, Marconi had formed a wireless telegraphy company to develop its commercial applications – The Wireless Telegraph & Signal Company.

To read about this, go to http://en.wikipedia.org/wiki/Guglielmo_Marconi

In 1918, air mail service was inaugurated between New York, Boston, and Montreal.

To read their marriage, visit http://en.wikipedia.org/wiki/Martin_Van_Buren_Bates

History Blogs
http://www.cha-shc.ca/english/links/history-blogs.html#sthash.kuhp2V0y.dpbs
Here is a list of history blogs in Canada.

History comes to life at the Military Museums’ Summer Skirmish
http://www.calgaryherald.com/life/History+comes+life+Military+Museums+Summer+Skirmish/9918410/story.html
Read about the Guns of the Golden West, a historical re-enactment group that represents the gunfighters of the 1880s.

Camp Kadesh has deep roots in Sask. history
http://www.thestarphoenix.com/travel/Camp+Kadesh+deep+roots+Sask+history/9917454/story.html#ixzz33xhgouCm
The roots of Camp Kadesh go back to 1946 when Alfred and Eldean Friesen from Dalmeny Evangelical Mennonite Brethren Church began a ministry to children that became known as Scripture Mission, from which Camp Kadesh was created.

Canadian history lives on in Smiths Falls
http://www.kingstonregion.com/news-story/4560836-canadian-history-lives-on-in-smiths-falls
Smith’s Falls is located half way between Ottawa and Kinston on the Rideau Canal, and it is the home of the Rideau Canal Visitor Centre.

Ed Coleman's History: Names of men important to history forgotten
http://www.novanewsnow.com/Opinion/Columnists/2014-06-05/article-3749837/Ed-Colemans-History%3A-Names-of-men-important-to-history-forgotten/1
Colemam writes about Ernest Steckle Eaton, the man who first discovered that Debert in Nova Scotia was a site of where Paleo-Indians settled over 10,000 years ago.

St. Peter's among Nova Scotia communities to receive spirit award
http://www.capebretonpost.com/Living/2014-06-06/article-3753633/St.-Peters-among-Nova-Scotia-communities-to-receive-spirit-award/1
The other towns that were chosen in Nova Scotia were Bridgewater, the Sackville area and the Town of Amherst.

Historic sign dismantled to appear in club
http://www.thestarphoenix.com/Historic+sign+dismantled+appear+club/9905363/story.html
The marquee from the old Capitol Theatre, which was demolished in 1979, was recently moved to the new Capitol Music Club, and it’s causing some concern to the Saskatoon Heritage Society.

Government of Canada Invests $10.05 million in Province House National Historic Site
http://www.digitaljournal.com/pr/1955273#ixzz33ZnZU7E3
They will do o repairs to the roof and windows, addressing water infiltration into the building and contributing, in general, to the preservation of the structure. 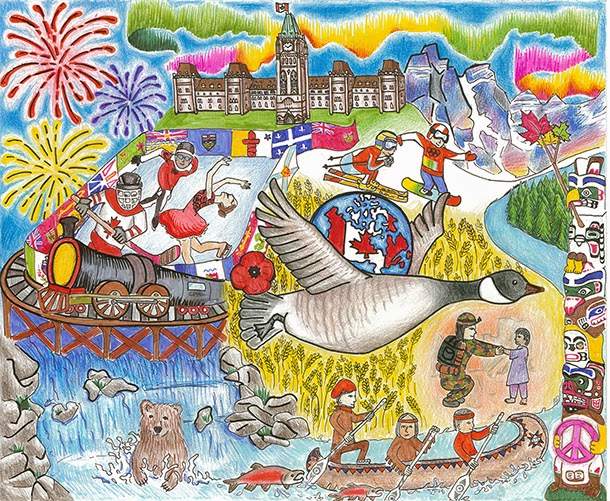 As the country get ready to celebrate the 147th birthday of Canada on the 1st of July, the young people of the country have been busy.

They have used their “creativity and imagination” and have taken “up the challenge to explore Canada's history, culture, and identity and to discover what makes this country a truly special place”.

Reminder: Check the Canadian Week in Review (CWR) next Monday for the latest in Genealogy, Heritage, and History news in Canada. It’s the ONLY news blog of its kind in country!