The Sinking of the Empress of Ireland 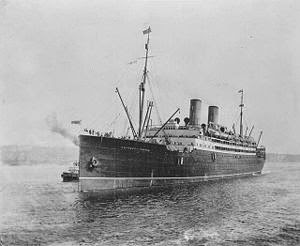 The Empress of Ireland was in a collision with the Norwegian collier SS Storstad in the early hours of 29 May 1914. Of the 1,477 persons on board the ship, 1,012 died.

The Beaurepaire-Beaconsfield Historical Society will meet on Thursday April 17th at 7:30 p.m. at the Centennial Hall, 288 Beaconsfield Blvd, Beaconsfield (Montreal). The lecture will be in English, but there will be a bilingual question period.

The lecture will be on the RMS Empress of Ireland, and the speaker will be Derek Grout who has written a book on the ill-fated liner Empress of Ireland which sank in the Gulf of St Lawrence, in front of Pointe-au-Père, in a collision in 1914.

The hundredth anniversary of the sinking is May 29 and the book's release in Canada is scheduled for early April, in advance of the anniversary. Canada Post is supposed to be issuing two stamps to commemorate the event, and various museums across the country have scheduled special exhibitions, most notably the Canadian Museum of History (formerly Canadian Museum of Civilization) in Gatineau, across from Ottawa.

At this lecture, you will be able to buy the book RMS Empress of Ireland, Pride of the Canadian Pacific's Atlantic Fleet by Derek Grout, at the price of $35.00.

Everyone welcome. Free for members and $2 for non-member. You can become a member for just $5 per year.

Although this is a pay site, there is the passenger and crew list (FREE) at http://www.sea-viewdiving.com/shipwreck_info/empress_home/passengerindex.htm
Posted by Elizabeth Lapointe at 9:38 AM No comments: Links to this post