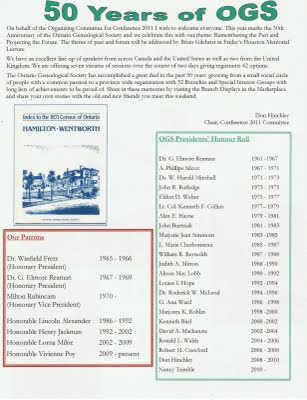 Saturday morning started off very early with the Opening Plenary, given by Stephen Young from FamilySearch.org.

In “Descendancy Research: Branching Out on Your Family Tree”, he talked about his Ontario family, and he stressed the importance of tracing your cousins to find out more information about your family.

After the AGM, I went to hear Brain Gilchrist's “Does Your Research Make Sense?”.

He took us on a journey through some of his research, always asking the question, “Does it make sense”? And he told us stories about the results of his own research that wouldn't make sense if you didn’t know the whole story.

Jane MacNamara's, “Discovering Rural Ancestors”, was an interesting and informative look at the Women's Institute of Ontario and the Tweedsmuir Histories, which the Ontario Genealogical Society is about to scan and make available in the “Member's Only” section of their website.

Nuala Farrell-Griffin—in her give her talk, “Shhh! It’s a Locality File”—emphasizes creating a locality file as the basis of research, rather than in Ireland or in Canada, or anywhere for that matter.

In the evening, at the OGS Golden Anniversary Banquet, guest speaker, Dick Doherty, gave us “Serendipity: A Lighthearted Look at Genealogy”, and was it ever lighthearted! Dick had us laughing all night long at his stories, jokes, and pictures of funny epitaphs and the like. As if the banquet supper itself and the chatter we had with the many interesting people at our table wasn't good enough (and indeed, it was!), it was worth it just to listen to Dick.

Both Mario and I were honoured to have been joined by Lisa Alzo, who herself gave five lectures during the weekend. One thing she mentioned was how impressed she was by the quality and quantity of questions asked of her during her sessions.
Posted by Elizabeth Lapointe at 9:26 AM No comments: