1910 – Vancouver Exhibition opened to the public for the first time in 1910. The Canadian Prime Minister, Sir Wilfrid Laurier, officially opened the first annual Pacific National Exhibition, known at the time as "The Industrial Exhibition."

The Fair was seen as a showcase of British Columbia to the rest of Canada and the world, and was the second-largest event of its kind in North America, behind the New York State Fair.

For further information, go to http://www.pne.ca/index.html

More than 40 people shuffle down West Street following a man dressed head to toe in black, carrying a cane.

Lt.-Col. Glen Moriarity suspects many military gems are stashed away — some intentionally, others inadvertently — in homes across Prince Edward Island.

Peter Russell has some rocks on his desk from the beach in tiny Ship Harbour, N.L. — the unlikely site of a secretive summit 75 years ago that helped shape the course and aftermath of the Second World War.

Sad loss: Co-editor of Dictionary of Newfoundland English dead at 91

Dr. William J. Kirwin, who was the driving force and co-editor of one of Newfoundland and Labrador’s most important books, The Dictionary of Newfoundland English, died on Aug. 4 at the age of 91.

The provincial Medical History Society has received funding to develop exhibits on the medical history of four counties in Nova Scotia, including Lunenburg.

In a “memorial” dated Aug. 20, 1778, John Burbidge petitioned the Nova Scotia government on “behalf of himself and many of the principal inhabitants of Kings County” for military protection and compensation following a raid by American privateers up the Cornwallis River.

For more than a century, a massive stone building with walls a metre thick and a copper roof was known for its history of receiving and transmitting happy announcements, top-secret messages and heartbreaking notifications.

The Fredericton Region Museum hosted its annual open house Sunday, this year opening the third floor to visitors interested in the cataloguing process.

A time capsule buried underground in 1864 was opened in the city of Peterborough on Friday, providing a glimpse into life in the Ontario town before the time of Canada's Confederation

A lumber baron. The American Civil War. An artists’ colony. Pre-fabricated houses. Those phrases may not immediately conjure up the Humber Bay neighbourhood, but they do describe some unique aspects of that area’s history.

In part one, the article started with: Municipalities provided an astonishing variety of records ... and that is the best start for this article too.

We all have at least one – that female ancestor who appears to have left no trail, or a very slim one at best. But with a bit of research and some extra sleuthing, you might find her hiding in plain sight – if you know where to look.

Manitobans experience life in the trenches

Flash back 100 years, to 1916: you're a rifleman with the Canadian military, trained at Camp Hughes near Carberry, issued a steel shrapnel helmet and gun, and sent overseas.

The Simpcw First Nation are making a symbolic return to their traditional land in Tête Jaune Cache this weekend — marking 100 years since they were forced to leave.

August 15th was National Acadian Day, and the Prime minister issued a statement in which he said “Acadian roots run centuries deep and stretch long past Confederation. In the early 1600s, Acadians established the first French settlements in what would eventually become Canada. Since then, Acadians have played a significant role in shaping the country we all call home”.

And Acadians celebrated the day in their own way. For example, the Acadians on Prince Edward Island “gathered at the Farmers' Bank of Rustico, P.E.I. for a "tintamarre" — an interactive Acadian parade.

People waved flags, shook instruments and were all smiles”.

The full story is at http://www.cbc.ca/news/canada/prince-edward-island/acadian-day-celebrations-1.3721711

They are starting to pick up stream! 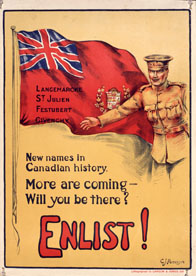 As of today, 320,638 of 640,000 files are available online in our Soldiers of the First World War: 1914-1918 database. Please visit Digitization of the Canadian Expedition Force Service Files at http://www.bac-lac.gc.ca/eng/discover/military-heritage/Pages/digitization-cef-service-files.aspx more details on the digitization project.

So far, the latest box which they have digitized is Box 5410 and Larocque.

The LAC asks you to please check the database regularly for new additions and if you still have questions after checking the database, you may contact us directly at 1-866-578-7777 for more assistance.

You are asked to "test drive" a new website 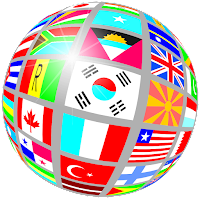 A very dear genealogist friend has a new job!

Noel Montgomery Elliot is now the Director of Research of www.edu.global. It is a new website that has designed for public libraries, archives, university and college libraries, and larger societies (both genealogical and historical), and you - genealogists!

He asked me to “test drive” the website, and after emailing him back and firth, Noel decided to give you, my devoted readers, a special code, so that you could “test drive' it too.

So, here is your special code – group789

The code gives users a free membership, no strings attached, until October 1st, 2016.

He says “Of course we hope you will mention that we are anxious to have any feedback from our free members, suggestions or discovery of errors. As I said before, genealogists, in my mind, are ideal people to test out the website in advance”.

So here are the directions -

(3) While registering it will ask for a COUPON: enter group789

Once you have successfully registered, from that point on just LOGIN each time you wish to search.

Important: once you login, please watch the images in a slide show, under"How to Search on edu.global"- that will show the basics of how to use this website.

Make sure you look around the site, and tell him what you think.