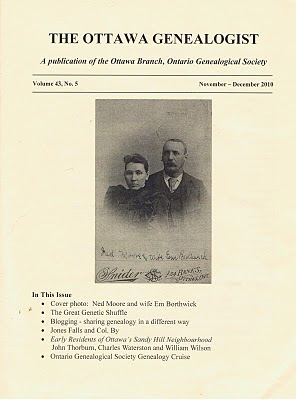 The Ottawa Genealogist is is now published four times a year by the Ottawa Branch of the Ontario Genealogical Society www.ogsottawa.on.ca. The editor is Edward Kipp, and he can be reached at editor@ogsottawa.on.ca. The Branch recently switched to an electronic version, with the paper-bound edition now an option.

In the November/December 2010 edition is an article by Elizabeth Kipp about blogging called, "Blogging - sharing genealogy in a different way".

In the article, Elizabeth tells how and why she set up a blog to describe her research trip to Salt Lake City, and posted to it on quite a regular basis while she was there.

Her blog address is kippeeb.blogspot.com.

Meanwhile, her husband and fellow genealogist, Edward Kipp, tells us about "Jones Falls and Col. By".

There are two articles from The Ottawa Citizen called the "Old-Time Stuff" (the first article is called "Col. By instituted Toll Gates Here; in '28 Put Tax on the First Bridge" October 18, 1824, and the second article "Where the Soldiers Lived on Barrack Hill" published March 23, 1924).

Other articles and features include the "Electronic Notebook" by Mike More, "Gleanings from Newsletters in the Ottawa Branch library" by Heather Oakley, and "John Thorton, Charles Waterston, and William Wilson" by Robert Serre.

All-in-all, an interesting read, as usual.
Posted by Elizabeth Lapointe at 8:49 PM No comments: