Don’t forget to check my blog every Monday morning for my New/Updated CANADIAN Websites, Blogs, and Newspaper Articles.

This week in the section Pictures and Story of the Week, I have put RootsTech 2013. So be sure to read the Canadian happenings at RootsTech.

Elizabeth
Posted by Elizabeth Lapointe at 4:29 PM No comments: Links to this post 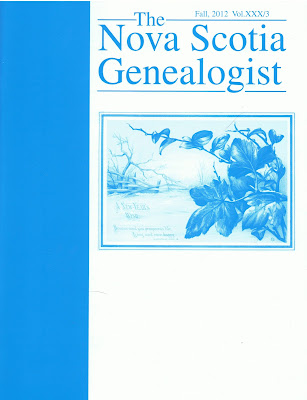 This will probably be the last printed The Novas Scotia Genealogist, as they are going to electronic newsletter shortly.

In this issue, they have Immigrants and Newcomers Married at St Johns Church, Lunenburg, 1817-1851 by Terry Punch. The church was founded in 1753, and is an Anglican Church.

There have been additions to the 42 marriages that were put on index cards by Heather Long. The additions include children who were baptised in the church.

The writer disproves through the Massachusetts Archives that Andrew White of Marshfield was not the Planter who settled in the Annapolis Valley.

The third article in the newsletter is The Hillcrest Mine Disaster and the Nova Scotia Connection by M. Bole .

The mining disaster occurred in Hillcrest, Alberta, and 189 miners were killed in 1914. Twenty-three miners were from Nova Scotia and the author gives a brief history of each of the minters.

The names of the miners were –

The writer has three other name of miners who may hace spent time in Nova Scotia, and they are Frank Bostock, Prosper Days, John Pearson, and she needs information on the following – August Fougere, William Miller, and William G. Miller.

Posted by Elizabeth Lapointe at 8:13 AM 2 comments: Links to this post