My Ancestors in Genealogy

http://adventuresingenealogy.wordpress.com/tag/canadian-research
In the Canadian ancestor part of her blog, she writes about “52 Ancestors #14: Eliza (Smith) Brown, three countries in one lifetime”.

Genealogy: Beyond the BMD
http://genealogybeyondthebmd.blogspot.ca
CWR correspondent, Gail Dever, write and tells us of a new Canadian blog that Dianne Nolin is now writing. She has been doing genealogy for 12 years, and she plans to blog daily.


Cannon to be fired in Sault
http://www.saultstar.com/2014/04/29/cannon-to-be-fired-in-sault
An 1812 cannon replica was to arrive at the Ermatinger·Clergue National Historic Site on Wednesday, April 30. The working replica, to be housed in the 1812 Gallery in the new Heritage Discovery Centre, will be used for re-enactments and special events. (This was reported by Gail Dever).

Negro Brook Road should be renamed, say area residents: Rural route used to be named after the 'N-word'
http://www.cbc.ca/news/canada/new-brunswick/negro-brook-road-should-be-renamed-say-area-residents-1.2630350
Residents of a small rural community in south central New Brunswick are pushing to change the name of their street, called Negro Brook Road. A Google search has come up with 36 other places in Canada with the N-word in their name.

Historic Moncton High School put up for sale: Department of Transportation and Infrastructure values downtown property at $1M
http://www.cbc.ca/news/canada/new-brunswick/historic-moncton-high-school-put-up-for-sale-1.2629935
Moncton High School is up for sale on the New Brunswick government’s website after a series of requests for proposals to redevelop the historic building failed.

Electric buses return to Winnipeg streets after 49 years
http://www.cbc.ca/news/canada/manitoba/electric-buses-return-to-winnipeg-streets-after-49-years-1.2629788
Electric transit has returned to Winnipeg for the first time since the city's trolley car rolled into history in 1965.

A tree of Moss
http://www.ganderbeacon.ca/News/Local/2014-05-02/article-3709424/A-tree-of-Moss/1
A family history book has been written by Mac Moss from Eastport, Newfoundland called Mosses of Bonavista Bay and Beyond. It is available on www.blurb.ca in print and PDF format.

Getting to the root of it
http://www.nlnewsnow.com/News/Local/2014-05-01/article-3708214/Getting-to-the-root-of-it/1
A group of students from their French class at Hampton Academy in Hampton, Maine recently visited Quebec City on a three-day excursion.

Highland Village offers new Gaelic program for Cape Breton students
http://www.capebretonpost.com/Living/2014-04-30/article-3707694/Highland-Village-offers-new-Gaelic-program-for-Cape-Breton-students/1
May is Gaelic Awareness Month in Nova Scotia, and there is a whole host of activeities going on around the province.

Playing with history
http://www.gulfnews.ca/Columnists/Chantelle-MacIsaac-/2014-04-28/article-3702951/Playing-with-history/1
Read how a tourist from Newfoundland discovered Nova Scotian cemeteries that went back as far as the 1700s.

At stunning memorial near Ypres, 'sentinel' looms over Canadians killed in gas attacks
http://www.thestar.com/news/walking_the_western_front/2014/04/at_stunning_memorial_near_ypres__looms_a__sentinel__over_canadians_killed_in_gas_attacks.html
Read a moving account of the Ypes Memorial in France, and of a Canadian soldier who died there - William John Howe

'Book of Negroes' films in Nova Scotia
http://www.insidehalton.com/whatson-story/4490362--book-of-negroes-films-in-nova-scotia
The TV mini-series, The Book of Negroes, is being filmed in Nova Scotia, and from what I hear, some of it will be shot in Shelburne (my hometown), just a short distance from Birchtown, where is located the Black History Heritage Society http://www.blackloyalist.com. 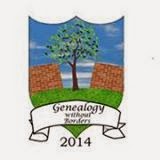 The Society held its annual Conference this year, and it was at Brock University in St. Catharine’s, near Niagara Falls.

A pall fell over the Conference with the death of Ontario genealogist Brian Gilchrist on May the 1st, and since he was scheduled to deliver the plenary speech, at the conference, a memorial speech gave it on his behalf.

This was the first conference where Social Media was formerly addressed. It has been partly addressed in the past, but this year, Steve Fulton and his crew really put both feet into the pool, as it were, and the Conference was off to the races.

A Google+ Hangout On Air was held at 8 o’clock in the morning on Saturday the 3rd of May, and it was good to hear the panel (Chris Paton (British GENES), Marian Press, Tony Bandy, Kirsty Gray and Daniel Horowitz (MyHeritage), and it was hosted by John D. Reid, blogger of the Anglo-Celtic Roots) discuss the subject. It remind me of the Roots Tech panel of a couple of years ago when panelists were asked what genealogy was going to be like in five years from now, and there were many of the same answers.

Unfortunately, one couldn’t hear all of it, because it crashed after 38 minutes, so I don’t know if my question ‘How has social media changed Canadian genealogy’ was ever asked, and if it was, we never heard the answer.

OGS Conference in Niagara - day one report
http://britishgenes.blogspot.com/2014/05/ogs-conference-in-niagara-day-one-report.html?utm_source=feedburner&utm_medium=feed&utm_campaign=Feed%3A+BritishGenesGenealogyNewsAndEvents+%28British+GENES+%28GEnealogy+News+and+EventS%29%29
Chris Paton, was a presenter and speaker at Friday’s evening Houston Lecture at the OGS. He gives a a summary of Day 1.

On my blog of Saturday May 3rd at http://genealogycanada.blogspot.com/2014/05/ogs-announces-officers-for-2014-2016.html, I announce the new president and vice president for 2014 to 2016, plus other members of the executive.

After initial missteps, the OGS put on their new website this past week. It is quite a change from the last version, but it fills the bill.

Reminder: Check the Canadian Week in Review next Monday for the latest in Genealogy, Heritage, and History news in Canada. It’s the ONLY news blog of its kind in country! The next post will be on May 12, 2014.
Posted by Elizabeth Lapointe at 12:30 AM No comments: