In 1713, the Treaty of Utrecht, the treaty between France and England which settled the War of the Spanish Succession, saw the return of Nova Scotia to Britain. France retained Cape Breton and the Island of St. John, now Prince Edward Island.

For further information, go to http://www.thecanadianencyclopedia.ca/en/article/treaty-of-utrecht/ 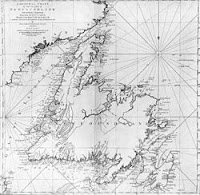 Two referendums were held after the Second World War; the first was inconclusive, and the second approved Confederation by only 52 per cent.

Thew capital city id St. Johns, and the island is the world's 16th largest, and Canada's forth largest island.

For further information, go to https://en.wikipedia.org/wiki/Newfoundland_(island)

A second Viking site may have been found in southern Newfoundland by a team of international archaeologists working in the province.

Officials with the Dartmouth Heritage Museum are pleased with a recent decision by the municipality to take responsibility for its collection of 45,000 historical artifacts.

The government was awarded last week with a 2016 Manning Awards for Excellence in the Public Presentation of Historic Places, International category, for its work on the Hebron Mission restoration.

The Hebron Mission is a project to restore the nearly 200-year old former Moravian church, as part of the Nunatsiavut government restoration program. It is taking part in the abandoned northern Labrador community of Hebron.

To read about Hebron, go to https://en.wikipedia.org/wiki/Hebron,_Newfoundland_and_Labrador, and the history of the Moravian church at http://www.heritage.nf.ca/articles/society/moravian-church.php

Not taking no for an answer: Municipal leaders from western Nova Scotia consider group trip to Ottawa

The Canada Legacy Society, a group that has been formed by compiling the 12 municipal units from West Hants to Yarmouth in Nova Scotia, has applied for over two million dollars in funding from the federal Canada 150 fund – Canada's birthday next year.

Back in July when plans were uncovered for $1.9 million Stompin' Tom Connors Centre, has hit a snag. The part of the funding that was to come from Heritage Canada has been denied because the centre is not considered an arts or heritage organizations by the Canadian Cultural Spaces Funding.

Okotoks Museum and Archives is going to be the host for the Provincial Archives of Alberta’s traveling exhibit called Alberta and the Great War to its facility next month.

The exhibit shows how the First World War affected and changed the province. It will be available for viewing April 1 and will remain on site until June 30.

If you want to go to the Town of Okotoks Museum & Archives, you can go to http://www.archivesalberta.org/walls/okotoks.htm

History matters: Westerners had to fight for vote

When the government came to the North-West Territories in the northern regions of Canada in the 1870s, they wanted to have a “free-hand” in deciding what kind of government would be in place, so the people had to fight for the right to vote. 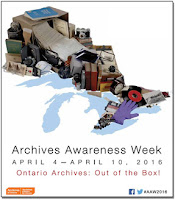 There is still a couple of days left as Archives Awareness Week is on till April 9th.

This year’s focus is Customer Appreciation Week, where you will learn about the amazing collections and services, and meet the people they’ve inspired.

You can visit the Archives Ontario site at http://www.archives.gov.on.ca/en/about/archives_week.aspx to see what is going on the archives this week.

I can personally give the Archives of Ontario (AO) the seal of approval. Last time I was there was two years ago, which I spent three days there, and the staff were nothing but friendly and helpful, and I found great help, especially going through the municipal files, and land grant. I had a great time!

the federal government are starting to hear announcements of funding 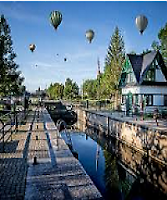 The Minister of Environment and Climate Change, Catherine McKenna, this week, announced an investment of more than $170-million to protect and preserve Parks Canada's five historic canals in Quebec.

The five canals are -

Lachine Canal - reconstruction work on the walls will be done

Chambly Canal – work will be completed on the locks and bridges

On the press release, The Honourable Catherine McKenna, Minister of Environment and Climate Change and Minister responsible for Parks Canada said that "Through this significant investment, our government is protecting and preserving these treasured places, while supporting local economies, contributing to growth in the tourism sector, and enhancing the charm and attractiveness of these heritage sites. I encourage Canadians to visit and experience Parks Canada's special places and to enjoy the outdoors, while learning about our rich history and heritage." 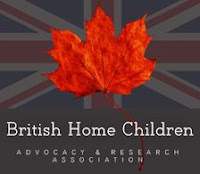 And finally, this week, there is an e-petition online at http://canadianbritishhomechildren.weebly.com/apology-petition.html which concerns an apology to the Home Children – the children who were sent here from the United Kingdom in 1869 to the 1940s to work on farm and as domestics.

Apparently, according to the people who have organized this petition, they now have enough signatures to go ahead with an initial presentation, but they will continue to collect signature for future presentations. They say that they will repeat this process as often as we feel necessary.