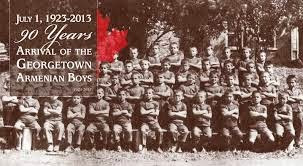 On April 23, city councillors and over 400 interested people gathered at a solemn ceremony at Cedarvale Park, Georgetown, Ontario commemorate the 100th anniversary of the genocide that the Turkish Ottoman Empire raged on the Armenian people. As a result, more than 400 Canadians, mostly of Armenian descent, came to Georgetown.

Why Georgetown you may ask?

From 1915-1923 the Turkish Ottoman Empire tragically killed an estimated 1.5 million Armenians during a disgraceful act of genocide.

In 1923 Armenian orphans were given a second chance at life by our Canadian government. In 1923, on Dominion Day, 50 Armenian boys arrived at the Cedarvale farm. Overall, 109 boys aged 9-12 endured a three week long journey by foot, road, sea and train to arrive in Georgetown.

They all became known as the “The Georgetown Boys”.

If you missed this week’s edition, it is at http://genealogycanada.blogspot.com/2015/05/canadian-week-in-review-11-may-2015.html
It’s the ONLY news blog of its kind in Canada.
Posted by Elizabeth Lapointe at 8:38 AM No comments: