This question has been answered by the Victoria Genealogy Society (VGS), They have decided to change the title of their Monthly Meetings to the Speaker Series – and they seemed to have struck on a winning title.

They say that they are ‘more about presentations and less about VGS business’ – therefore the change.

So the first participant in the Speaker Series will be John Azar and he will talk about LEST WE FORGET WHERE THEY LIE: Remembering War Dead and Veterans Buried in Victoria Region Cemeteries.

John Azar, President of the CEF 100 Commemoration Society, will provide an overview of the South Vancouver Island cemeteries where veterans are buried. After telling stories about a few of those veterans, John will invite the audience to indicate the research they are conducting on ancestors who served in the First World War or other conflicts.

He is also inviting people to the annual Old Cemeteries tour of the Veterans Cemetery in Esquimalt on April 19th.

Doors open at 7pm at Gordon Head United Church, 4201 Tyndall Avenue. Admission is free for VGS members and by donation for visitors.

Come early to view the displays and the sales table, and to network with other genealogy enthusiasts.

So the business of the group will not be discussed at this meeting, and the emphasis will be changed to the speaker, displays, and networking between the attendees.

What do you think about changing the emphasis of Monthly Meetings to the Speaker Series? Does it make any difference what you call a meeting? Would it help to attract new members to have a new nomenclature? Notice that the speaker will 'invite' the attendees to talk about their research. He won't be there just to talk, and answer a few questions - it will be an exchange of research. Is this what people want in their meetings? Interesting, isn’t it?

To go to their website, it is at http://www.victoriags.org

To go their  Facebook page, it is at https://www.facebook.com/vicgs


It has been a regular post every Monday morning since April 23, 2012.
Posted by Elizabeth Lapointe at 2:30 PM 2 comments: Links to this post

Meeting in Halifax - The House on Refugee Hill 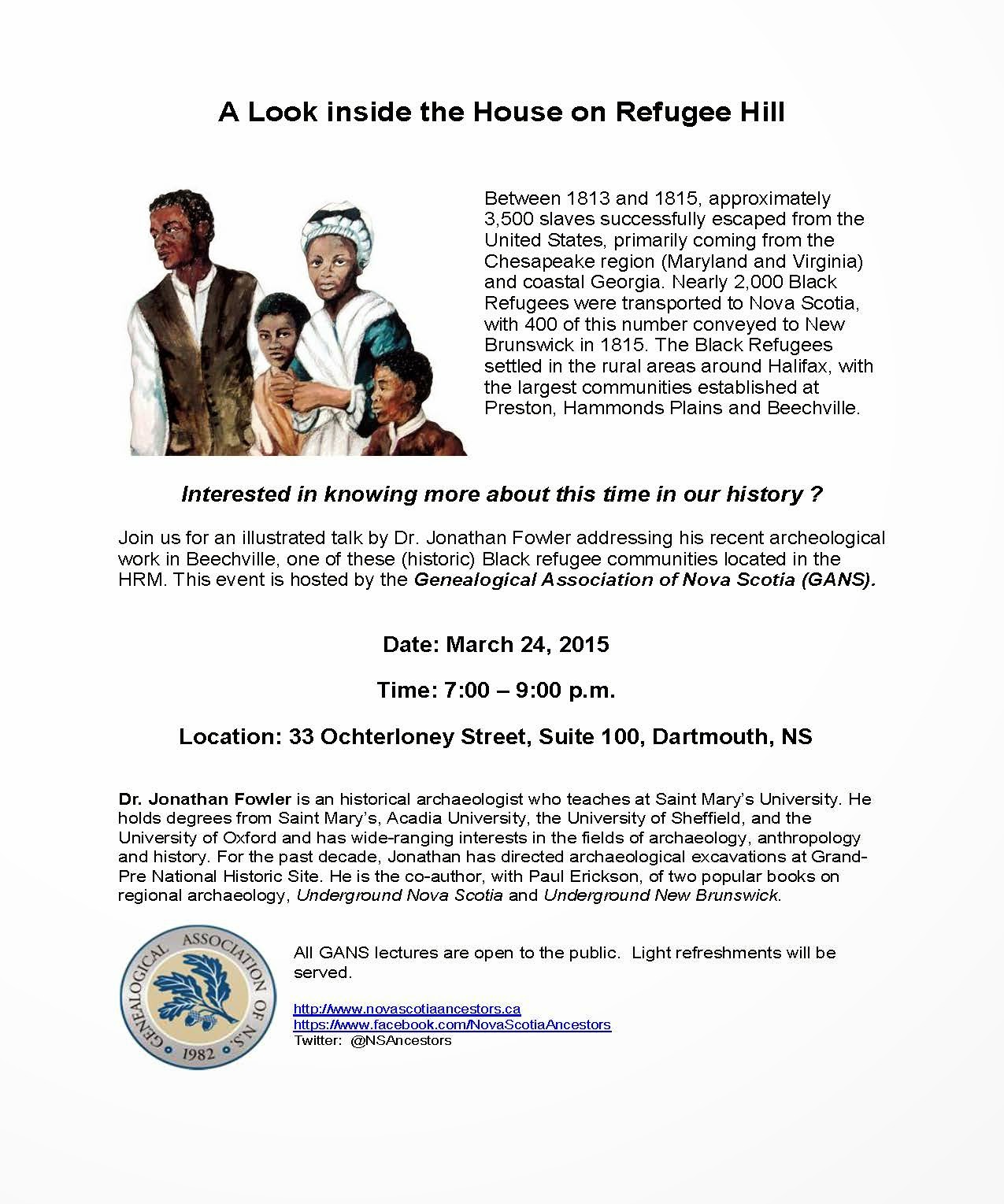 Om Tuesday March 24th at 7:00 pm, the Genealogical Association of Nova Scotia (GANS) will hold a meeting at 33 Ochterloney Street, Suite 100, Dartmouth, NS, and it will be called The House on Refugee Hill: An Archaeological Time Capsule.

The talk will be given by Dr. Jonathan Fowler, and he will address his recent archeological work in Beechville, an historic Black refugee community located in the area.

Dr. Jonathan Fowler is an historical archaeologist who teaches at Saint Mary’s University. He holds degrees from Saint Mary’s, Acadia University, the University of Sheffield, and the University of Oxford and has wide-ranging interests in the fields of archaeology, anthropology and history. For the past decade, Jonathan has directed archaeological excavations at Grand-Pre National Historic Site. He is the co-author, with Paul Erickson, of two popular books on regional archaeology, Underground Nova Scotia and Underground New Brunswick.

GANS lectures are open to the public. Light refreshments will be served.


Posted by Elizabeth Lapointe at 12:30 AM No comments: Links to this post