On Saturday, June 4th, we went down to Montreal to take in a day with our “genealogical friends” from the Quebec Family History Society, as they put on their semi-annual conference at McGill University.

It is just a two hour drive down to Montreal from Ottawa. We took Route 148 on the Quebec side down to Grenville, and then we joined Hwy 50 to Lachute, and then on to Hwy 15 right down into Montreal, where we spent an hour navigating downtown Montreal traffic and then finding the building, and once we had found the building – then we had to find a parking spot. We finally did find underground parking (there isn't as much as you would think there would be), and then we tried to get out of the building.

As some of you know, I am in a wheelchair, and after 'wheeling” me around for what seemed like hours (there were only steps UP to Sherbrooke Street), we stopped into the shops in the complex, and found the helpful manager of the local print shop, who promptly led us through the maze of shops and hallways back to the parking area, and with a sigh of resignation, my husband pushed me up the steep ramp to the street.

So with that, we were ready, and we finally made our destination.

The first place we went to was the Marketplace.

After bumping into Gary Schroder (the QFHS President), we headed over to the Ontario Genealogical Society's table, which was manned by the recently-retired Executive Director, Fraser Dunford. He reported very good sales, and he said the crowds were steady throughout the day. 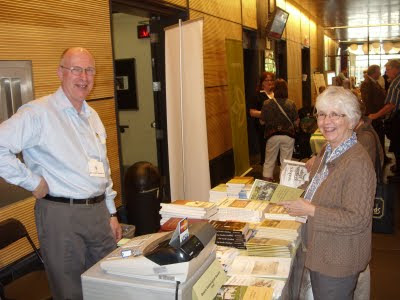 Fraser Dunford, of the OGS, talks with a potential book buyer.

Next, we went to the Moorshead Magazines http://www.moorshead.com table to see Rick Cree and his wife, Jennifer, and we had a really nice talk, as we hit them right as the people went on to hear another lecture. Ed Zapletal — usually the other half of this dynamic duo, alongside Rick — didn't come down to Montreal, as he was home in Toronto, helping his mother celebrate a very special birthday.

We then joined the crowd for lunch. It was a buffet over at l’Hotel Le Cantlie across the street, and was it ever good!

We sat with a couple of people from Ottawa who were there also, including Evelyn Burke and her friend — and after eating our tasty chicken sandwiches, lovely cream of broccoli soup, delicious brownies, and a nice cup of coffee or two — we went back to the conference, and ran into Glenn Wright signing copies of his latest book, Canadians at War 1914-1919: A Research Guide to World War One Service Records, which I reviewed in the OGS' journal, Families, (November 2010 edition), and on this blog at http://genealogycanada.blogspot.com/2010/12/to-continue-overview-that-i-started.html. 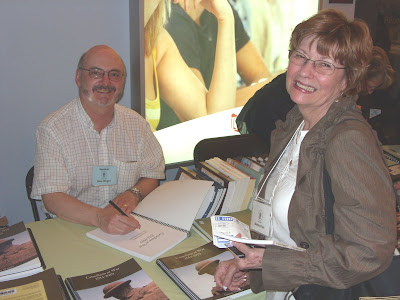 Glenn Wright signs a copy of his newest book, Canadians at War 1914-1919: A Research Guide to World War One Service Records, for this lucky lady.

We also dropped in to see saw Louise St. Denis of the National Institute for Genealogical Studies http://www.genealogicalstudies.com, and her husband, Michael, at their display. They reported very good sales, and the people were interested in the Social Media course she was giving away for free, and she seemed pleased with the conference. I also took the opportunity to buy the book recommended for this course, which is Social Networking for Genealogists, by Drew Smith.

We stopped to chat with Derek Hopkins of the QFHS, and then went to see his and Bob Dunn's lecture on cemeteries. It was one of the better lectures I have attended at a conference. 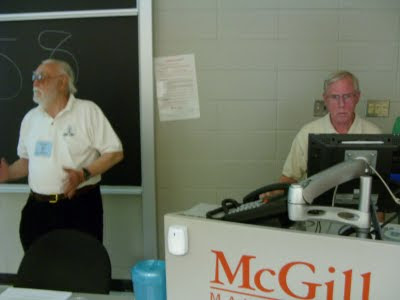 As participants filled up the classroom, a PowerPoint presentation of Quebec Protestant Cemeteries in the Eastern Townships was shown, accompanied by soothing music– a very relaxing few minutes before the lecture began.

Both Derek and Bob made the point that they have only started to put in the transcriptions of the cemeteries into the “Members Only” section of the QFHS website http://www.qfhs.ca, and it has proven very popular with the membership.

While there, we saw more Ottawa people, including John D. Reid, of Anglo-Celtic Connections blog fame http://anglo-celtic-connections.blogspot.com, Malcolm Moody and his lovely wife of Archive CD Books http://www.archivecdbooks.ca, (where we heard more parking horror stories), Lesley Anderson from Ancestry.ca, and we said “Hi!” to people from Quinte Branch of the Ontario Genealogical Society, and to people we knew from Montreal.

After missing our turnoff, and getting lost near Concordia University in Montreal's west end, we stopped for directions at a local pizzeria, and got some great pizza at the same time. Then we got back on Hwy 15 to head out of the city, stopped at Blainville for supper, crossed over to Hawkesbury on the Ontario side, and came up on Hwy 417, where we stopped on the side of the road to take pictures of one of the best sunsets we had seen in many a moon, and then we were safely home around ten or so. 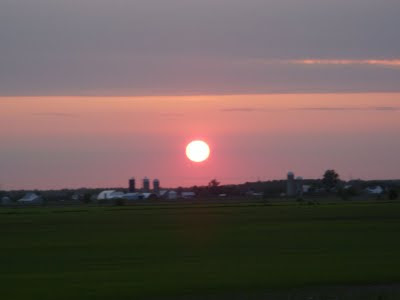 Sunset near Casselman, Ontario. It was even more beautiful live.

Posted by Elizabeth Lapointe at 11:19 PM No comments: Links to this post 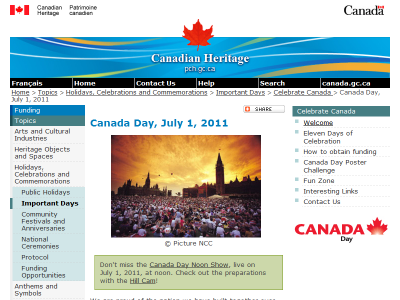 Canadian Heritage, a department of the Canadian federal government, is celebrating Canada Day!

If you would like to read about the evolution of Canada Day, go to http://www.pch.gc.ca/pgm/ceem-cced/jfa-ha/canada-eng.cfm

And as the site notes -

"Don't miss the Canada Day Noon Show, live on July 1, 2011, at noon. Check out the preparations with the Hill Cam!"