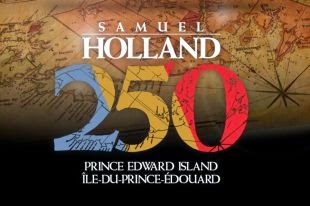 This year marks the 250th anniversary of the completion of Samuel Holland’s map of Prince Edward Island by holding a series of lectures and educational activities.

The highlight of the Samuel Holland 250 Commemorations will be the restoration and display of Samuel Holland's original 1765 map of Prince Edward Island which will be part of an exhibit at the Confederation Centre Art Gallery later this year.


The first lecture will take place on Thursday 19 February 2015 at 7 p.m. in Room 21C of the Charlottetown Centre, Prince of Wales Campus of Holland College. The presenters will be island authors and historians Boyde Beck and Georges Arsenault, along with Aubrey Bell, a local gallery owner who specializes in antique maps.


If there is a snowstorm, the tentative date for this lecture will be Thursday 26 February 2015 at 7 p.m.


If you go to the site at http://samuelholland250pei.ca/, you will be able to take the Samuel Holland quiz, get the answer to What’s my Lot?, and read the Recounting the Holland Survey.

If you missed this week’s edition, it is at http://genealogycanada.blogspot.com/2015/02/canadfian-news-in-review-16-february.html

It has been a regular post every Monday morning since   April 23, 2012.
Posted by Elizabeth Lapointe at 12:30 AM No comments: Links to this post