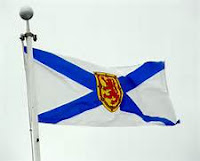 In 1690, the first major engagement of King William's War, British troops from Massachusetts seize Port Royal in Acadia (Nova Scotia and New Brunswick) from the French.

To read more, go to http://www.blupete.com/Hist/NovaScotiaBk1/Part2/Ch09.htm

(Photos) 'Transported to another time and place': Saskatoon historian talks history of radio

These days it's easy to come by various radio programs, whether it's through a car stereo or streaming on a computer. But 100 years ago, tuning in wasn't a reality for people who lived in Saskatchewan.

ARCHIVES: Inside the Kingston Penitentiary in 1981

As the notorious former Kingston Penitentiary is set to open up for public tours in June, we take a look at archival footage from inside the prison more than 30 years ago.

Acadian Recorder heritage building in Halifax could go to developers

A heritage building that was home to one of the longest-running newspapers in Nova Scotia needs hundreds of thousands of dollars in repairs as it is offered up by the province to developers.

The provincial government wants to find out who is interested in the Acadian Recorder building and the adjacent Dennis Building, both located on Granville Street near Province House in Halifax.

The Town of Annapolis Royal is rich in history, arts, culture and beauty which makes Annapolis Royal the place where history meets opportunity – and they seek to build a new website. Home to Canada’s oldest National Historic Site, Fort Anne, where you can see the Royal Charter from which Nova Scotia gets its name and flag.

Subdivision streets to be named after N.S. women who propelled province forward

The new subdivision going up in Rockingham South is more than just a development.

It recognizes women of great importance to Nova Scotia’s history. Five street names in the area near Clayton Park pay homage to the great Nova Scotia women who propelled the province forward.

Hank Snow began his professional career there in 1933.

CHNS, Nova Scotia’s oldest radio station, is celebrating its 90th anniversary this month and is sharing a storied past with listeners. That past has been woven into the tapestry of everyday life in Halifax for almost a century.

What better way to celebrate Canada’s 150th birthday than with a fleet of Tall Ships?

Returning to Halifax just in time for the province’s anniversary celebration, a fleet of 40 vessels will sail into the harbour next July.

Rebecca Thomas criticized the all-white group who appointe\d her to the role in March, noting the "sweet irony" of some concerns that history would be erased in favour of an indigenous narrative.

Tilbury and District Historical Society recognized by University of Windsor

There's a lot of interesting family history in this West Kent community that a fairly new organization has received recognition for preserving and making available to the community.

The Tilbury and District Historical Society (TADHS) is the latest recipient of the Community Heritage Medal from the University of Windsor's history department.

Sunnyside Drive in Stittsville became a continuation of Brightside Avenue in March, to avoid confusion with Sunnyside Avenue in Old Ottawa South. But Stittsville's Bell Street, Meadowland Drive and Elm Crescent are still waiting for their new names.

Once Upon a City: Will Ontario’s gem glisten again?

Ontario Place, a cutting-edge showpiece in 1971, lost its lustre. It’s set to reopen next year.

A city committee has endorsed recommendations from Winnipeg's planning department to put more pressure on heritage building owners to maintain their properties.

Holding on to history: Northeast Winnipeg Historical Society preserving the past

A small group of volunteers is working tirelessly to preserve Northeast Winnipeg’s history, and there’s plenty of it to preserve, Jim Smith said.

Take a deep breath, Manitoba, that's a lot of candles to blow out.

It's Manitoba's 146th birthday and throughout the province, museums and other facilities are hosting events or offering free admission to mark this special occasion.

A Manitoba heritage group's plan to open a rail museum is in limbo because Canadian Pacific Railway told them the company wants the old train station back — after the group spent more than $50,000 renovating the building.

Vancouver heritage house could be saved from demolition after city intervenes

A heritage house in Vancouver could be saved from demolition after the City of Vancouver ordered a heritage inspection of the property under the terms of a new bylaw passed by council in September last year.

The property — at 1550 West 29th Ave. — a Tudor-style home built in 1922, was once used to demonstrate how electricity could be used in the home. It is not currently listed on the Vancouver Heritage Register.

Opinion: 'This used to be Chinatown …'

I travel to cities around the world that have Chinatowns — San Francisco, Honolulu, Brisbane, Yokohama, even Amsterdam. I visit because of my research as a historian, but I also have a personal interest.

Pierre Berton, who always had an eye for a good story, now has a central viewpoint in his storied birthplace — Whitehorse.

A bronze bust of the late historian, writer and broadcaster was unveiled Tuesday on Main Street in the city's downtown. It was commissioned by local entrepreneur Rolf Hougen and his family.

Tulip Festival is back for another year, in fact this will be the 71st year that it will be held.

This has been the first weekend, and it will be held until the 23 May 2016 in Ottawa.

This year it is being held at Lansdowne Park at the historic Aberdeen Pavilion, and it should be just beautiful.

Be sure to go out and see the tulips. They are beautiful!

Have you read the OGS blog lately?

Alan Campbell, the author of the blog, comes up with some great subjects, and the subject this month is building your yearly research plan.

He gives credit to George G. Morgan, an American professional genealogist, and one of the Genealogy Guys, for being his 'unofficial mentor in building yearly research plans'.

Please check the database regularly for new additions and if you still have questions after checking the database, you may contact them directly at 1-866-578-7777 for more assistance.

In closing today, I see where Findmypast didn't put any Canadian records on the site last week, as they were going to. Maybe they will this week. I am so interested to see what they put on the Internet.

Sponsored by Elizabeth Lapointe Research Services. To learn more about the research

(c)2016 All rights reserved.
Posted by Elizabeth Lapointe at 3:35 PM No comments: