Today, I offer two new items related to the 1921 Canadian Census. One is an editorial by Canadian genealogist (www.cangenealogy.com) Dave Obee, and the other is a new online petition by blogger Bill Robinson.

First, there has been further clarification on the release of the census, as well as other news from the Library and Archives Canada, compliments of Dave Obee in his editorial in the Times Colonist newspaper in Victoria, British Columbia entitled, "Don’t let politics interfere with data access" at
www.timescolonist.com/news/b-c/dave-obee-don-t-let-politics-interfere-with-data-access-1.325155

I noticed that he said, “Back to the 1921 census. Volunteers are lined up, ready to start indexing the 8.8 million names as soon as the images are placed online. Last year, after the 1940 United States census was put on the Internet, volunteers compiled an index of its 132 million names in just four months”.

Have you been approached to be a volunteer?

In the meantime, we await the release of the census so that the LAC can put it online.

According to my sources, there might be something happening in about two weeks’ time.

It seems that the pressure has been felt.

From the comments on my blog and emails, and from other blogs, websites, and listservs I follow, your continued individual and collective efforts put forth in the "trenches" in letting the Heritage Minister and others know how genealogists everywhere feel about the current stance on the non-release of the 1921 Canadian Census ARE being noticed!

In the meantime, fellow blogger, Bill Robinson, http://robinsonb.blogspot.com, has started an online petition, and you are encouraged to read it and add your name to it at https://www.change.org/en-CA/petitions/the-honourable-james-moore-release-the-1921-census-now

Thank you, Bill, for this initiative.

Where this will lead is anyone’s guess, but I suspect that we will find out sooner rather than later.

As for the Heritage Minister, the Honourable James Moore, he can be contacted through his constituency office at www.jamesmoore.ca/EN/contact_us

To look at my past posts on the 1921 Canadian Census, just type in “1921 Census” in the search box on the right-hand side of the main page. Here are screenshots of the search and results boxes, below.

And please take a moment to check out the comments – they are interesting, supportive, and informative. Thanks to all who have written. 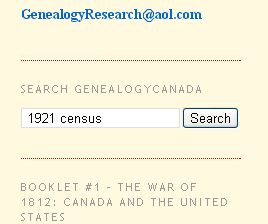 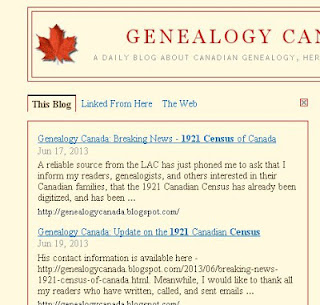 Posted by Elizabeth Lapointe at 5:59 AM 2 comments: