Celebrating 50, 100 and 150
http://www.journalpioneer.com/Living/2014-03-24/article-3660548/Celebrating-50,-100-and-150/1
A full audience enjoyed “The Hundredth Summer”, a National Film Board documentary chronicling the celebrations surrounding the centennial of the Charlottetown Conference.

Researching your ancestral roots requires digging, but it's worth it
http://www.winnipegfreepress.com/arts-and-life/diversions/researching-your-ancestral-roots-requires-digging-but-its-worth-it-251847041.html
Read about how the writer of this article found out about her Métis heritage.

'Royal' compromise first floated last year
http://thechronicleherald.ca/novascotia/1195395-royal-compromise-first-floated-last-year
The article demonstrates that how one feels about history in Canada can run deep.

Exposed: More photos of the 1870 Wolseley Expedition
http://www.northumberlandnews.com/opinion-story/4430176-exposed-more-photos-of-the-1870-wolseley-expedition
Two more picture have been added to the Wolseley Expedition that was covered by this news summary a number of weeks ago.

Canadian History Project to Present IN HIS NAME, April 23-27
http://www.broadwayworld.com/toronto/article/Canadian-History-Project-to-Present-IN-HIS-NAME-April-23-27-20140326
With a mandate to produce plays set in Canada prior to Confederation, The Canadian History Project is proud to present In His Name-Dollard Des Ormeaux and the Battle of Long Sault in April at the The Array Space, 155 Walnut Avenue, Toronto.

P.E.I. Father of Confederation leaves lasting legacy
http://www.theguardian.pe.ca/150th-Charlottetown/2014-03-27/article-3666789/P.E.I.-Father-of-Confederation-leaves-lasting-legacy/1
Read how Edward Whalen immigrated from Ireland to Prince Edward Island, and became a publisher, journalist, orator, politician, and one of the Fathers of Confederation.

How Canada became home to some of the world’s more visually stunning — and fun — heraldry
http://news.nationalpost.com/2014/03/27/how-canada-became-home-to-some-of-the-worlds-more-visually-stunning-and-fun-heraldry
Read how Sault Ste. Marie, Ontario became the latest city in Canada to receive it own Coat of Arms. 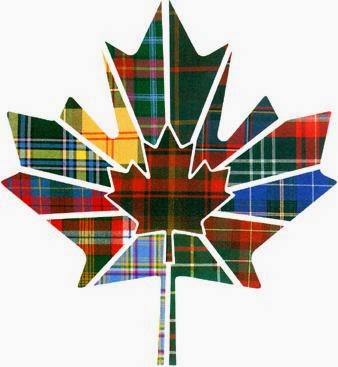 On October 21, 2010, the Minister of Canadian Heritage officially declared April 6 as Tartan Day. Did you know that the reason it is celebrated on April 6 because it is the anniversary of the signing of Declaration of Arbroath in 1320, the Scottish declaration of independence.

In Canada, Tartan Day originated in the late 1980s in Nova Scotia (my home province), where it was declared an official day by the provincial government. It then spread across the country, with many provinces joining in.

The celebrations usually include parades of pipe bands, Highland dancing and sports, and other community gatherings with Scottish-themed events. And it usually includes a special pipe band with Highland Dancers on Parliament Hill.

The Canadian Maple Leaf Tartan was created in 1964 by David Weiser in anticipation of the 100th anniversary of Canada's confederation in 1967. It was designed to be worn by Canadians from all backgrounds regardless of their ancestry, as a symbol of national pride.

So go out and celebrate Tartan Day, and wear the Canadian Maple Leaf Tartan!

Reminder: Check the Canadian Week in Review next Monday for the latest in Genealogy, Heritage, and History news in Canada. It’s the ONLY news blog of its kind in country! The next post will be on 7 April 2014.
Posted by Elizabeth Lapointe at 12:30 AM No comments: Links to this post