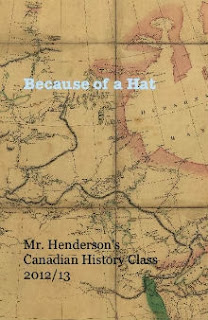 Matt Henderson, a history teacher from St. John's Ravenscourt School in Winnipeg has won the 2013 Governor General's History Award for Excellence in Teaching.

Awards are administered by Canada’s History Society, and are awarded "to the best Canadian achievements in the field of history and heritage".

http://www.gov.mb.ca/chc/archives/family_history/index.html) “to help them gain a better understanding of the experience of indigenous persons in Manitoba”.

“They learned about conducting research in archives, they wrote historical fiction based on what they discovered - they even published their own Idle No More textbook called Because of a Hat - Stories of Red River”.

Go to Winnipeg teacher wins GG Award at http://www.cbc.ca/news/canada/manitoba/scene/winnipeg-teacher-wins-gg-award-1.2159524
Posted by Elizabeth Lapointe at 6:39 AM No comments: