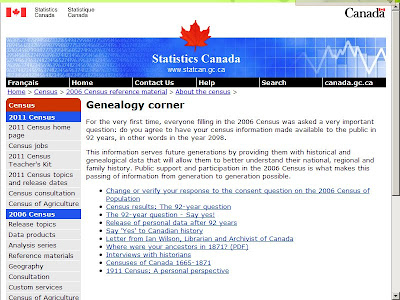 Do you know that Statistics Canada has a "Genealogy Corner" webpage on its site at http://census2011.gc.ca/ccr03/ccr03_000-eng.htm? On the website is this quote: "The 2011 Census questionnaire contains a question that permits you to be part of the history of Canada. If you check yes to this permission question, your descendants will be able to do family and genealogical research on you and your family in the future".

If you go on the "Release of personal information after 92 years" webpage at http://census2011.gc.ca/ccr03/ccr03_002-eng.htm, you will see where they held "citizen focus groups and "Town Hall" meetings" before they decided to take the course that they have now adopted, and have passed as law (against the wishes of the Canadian genealogical community) as the "new" standard for Census Canada.

Make sure that YOU answer YES to the question on the Census Form so that 92 years from 2011, your census information will appear on the forms that are released to Library and Archives Canada.
Posted by Elizabeth Lapointe at 6:57 AM No comments: