FamilySearch Indexing Update – Who will index or arbitrate the billionth record?

Here is a message from FamilySearch -

Since the launch of FamilySearch indexing in September of 2006, over 984 million records have been indexed and arbitrated! The advances of technology and the dedication of our volunteers have increased the speed with which we can process and deliver records for publication. We are so close to reaching one billion records indexed and arbitrated! Join us in a global effort to reach this goal. Who will be the one to index or arbitrate the billionth record? Will it be you? Start indexing today!

Special prizes will be given to the indexers and arbitrator of the billionth record.

To view a list of currently available indexing projects, along with their record language and completion percentage, visit the FamilySearch indexing updates at www.familysearch.org/learn/wiki/en/FamilySearch_Indexing_Updates. To learn more about individual projects, view the FamilySearch projects page at https://indexing.familysearch.org/projtab/current_projects.jsf
Posted by Elizabeth Lapointe at 6:44 PM No comments: 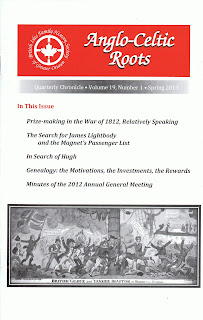 Once again, the BIFHSGO’s journal is full of news about the society, and the articles in this issue are of interest to me because two of them take place in Halifax, Nova Scotia, my home city and province.

The first article is by Faye Kert and is entitled Prize-making in the War of 1812, Relatively Speaking.

It concerns the privateers who lurked around the Nova Scotia coast to catch ships that plied cargo and people (immigrants) back and forth to England. And one of the ships that was caught in the war was the Magnet on their way from Ireland to New York, and it was a ship full of Irish immigrants.

The ship was captured, and had to put into Halifax, where it was auctioned in April 1813.

It so happen that a person in Nova Scotia, Amanda Lightbody, who saw Faye’s notice about the talk that she gave at BIFHSGO’s monthly meeting on exactly the same topic that was covered in Spring edition of Anglo-Celtic Roots. Amanda got in contact with BIFHSGO, and another article was born - The Search for James Lighbody and the Magnet’s Passesger List.

She couldn’t find any information on the ship Magnet until she saw the BIFHSGO notice on the website, and then it all fell into place.

James Lightbody, one of the 100 immigrants, who landed in Halifax, spent most of his time between Maine and Nova Scotia, but other members lived in the Truro area of the province.

The remainder of journal include In Search of Hugh by Christine Woodcock, and Genealogy: the Motivations, the Investments, the Rewards by Leighann Neilson and D.A. Muise.

To go to BIFHSGO, click on to the www.bifhsgo.ca
Posted by Elizabeth Lapointe at 6:58 AM No comments: