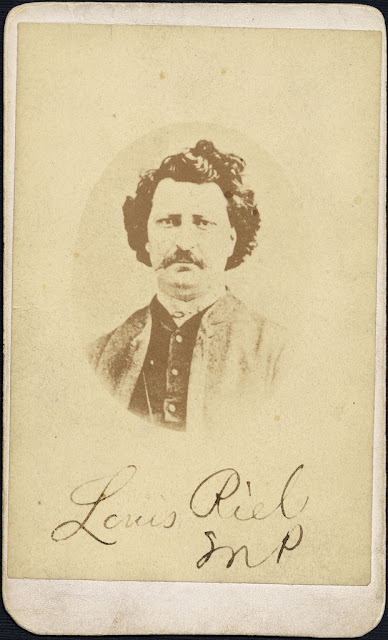 Yesterday was Louis Riel Day in Manitoba. The Library and Archives Canada just put more pictures on Flickr at www.flickr.com/photos/lac-bac/sets/72157628221185477

Louis Riel Day: Remembering Manitoba Founding Father http://louisrielday.com/ You can go on the Louis Riel tour, a very good timeline of events in his life, and a video.

Louis Riel http://en.wikipedia.org/wiki/Louis_Riel#Execution There is a history of Louis Riel from his birth on the 22 October, 1844 to his execution on 16 November, 1885. It reviews his life in Parliament in Ottawa, and as a Métis leader of his people in Manitoba, to his involvement in the Red River Rebellion, and the North-West Rebellion.

A Biography of Louis Riel http://law2.umkc.edu/faculty/projects/ftrials/riel/rielbio.html The biography discusses his education in Montreal, and as a voice of the Métis of the prairie provinces, and of his trial for treason.

They are available for purchase through Global Genealogy at http://globalgenealogy.com/, the National Institute of Genealogical Studies at http://www.genealogicalstudies.com/, and now, in the U.S., from the Family Roots Publishing Company at http://www.familyrootspublishing.com/.
For more on the booklets, go to http://genealogycanada.blogspot.com/2012/01/booklet-1-war-of-1812-canada-and-united.html and http://genealogycanada.blogspot.com/2012/01/booklet-2-migration-canada-and-united.html
Posted by Elizabeth Lapointe at 6:00 AM No comments: