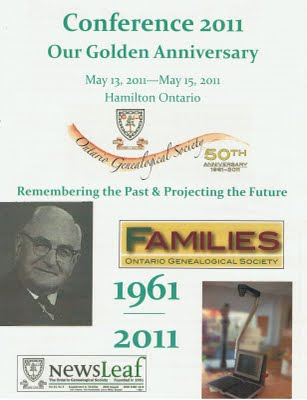 We went down to Hamilton last Wednesday, planning to do some research before the OGS Conference started on Friday, but the “car gods” had something to say about that - we never got to do any research!

The car broke down in the express lane of the 401 in the middle of Toronto (just past the Don Valley Parkway) in evening rush hour. After getting a ride in a tow truck to the Hamilton hotel where we were staying, we spent the next two days babysitting our car while it went through hours of testing to finally realize that it was simply a sticky throttle!

So Friday evening was the first time we were able to go to Conference.

After opening remarks by Nancy Trimble, President, and The Honourable Vivienne Poy, Senator (Honourable Patron of the OGS), the excited conference-goers sat earnestly listening to The Houston Memorial Lecture as given by J. Brian Gilchrist entitled, “Looking Forward by Looking Back: the changing face of genealogy and family history”, in which he gave a lighthearted review of where the OGS has been in the last 50 years, and where it is going in the next 50.

He made extensive use of videos in his presentation, which kept it lively and interesting to the very last word. Anyone who has heard Brian speak knows that he is a very good speaker, and he ended his talk by asking us who will carry the OGS into the next 50 years.

Brian said that technology will carry the OGS in the next 50 years. He went through all the things technology does for us now - online databases, blogs, Twitter feeds, etc - but there will be a lot more before it is over. By the time he was finished his talk, we were as enthusiastic as he was - and looking forward to the future.

You will be able to read his Houston Lecture in the August edition of Families (of which I am its editor), along with the opening remarks given by Senator Poy.
Posted by Elizabeth Lapointe at 8:55 PM No comments: