No new websites this week.

This Week in History

On June 22, 1869, an act was passed establishing the government of the Northwest Territories, which then included much of the Prairies, and in 1905, the House of Commons passed a bill establishing Alberta and Saskatchewan as provinces, effective September 1, 1905.

A history of Alberta and Saskatchewan is given on http://www.canadahistoryproject.ca/1905/index.html

In 1950, the Canadian naval destroyers HMCS “Cayuga”, “Athabasca”, and “Sioux” left Vancouver—escorted by the cruiser “Ontario”—for Pearl Harbour during the Korean Conflict.

In 1930, George Stathakis died when he plummeted over Niagara Falls in a barrel. Can you imagine that the turtle he took with him - survived?

Read about the Niagara Daredevils at http://reservationsystems.com/niagara_daredevils/george_a_stathakis.html

On June 22, 1955, the laying of a transatlantic telephone cable began at Clarenville, Nfld.

To read a history of both the telegraph and the telephone, go to http://clarenville.newfoundland.ws/Clar_Telegraph.asp

This blog explores many online resources, and I always find something of interest here to read about.

The latest blog is about a First World War Walking Tour to be held in Regina on June 23rd called, Back to the Front: A Poetic Walking Tour about WW1.

Celebrating with a bang!
http://www.nlnewsnow.com/Community/2014-06-18/article-3768188/Celebrating-with-a-bang!/1
Bruce Haynes, from Happy Valley-Goose Bay in Labrador, and a military history enthusiast, is constructing a five-and-a-half-foot cannon to launch his fireworks on July 1.

Memorial University launches WWI commemoration program
http://www.cbc.ca/news/canada/newfoundland-labrador/memorial-university-launches-wwi-commemoration-program-1.2680789
The students and faculty of Manorial University are working on nearly 40 projects that will commemorate the First World War.

Why this Nova Scotia town may make you miss the ferry
http://www.theglobeandmail.com/life/travel/destinations/yarmouth-offers-many-good-reasons-to-miss-the-ferry/article19257950
After a four-year hiatus, the overnight ferry from Yarmouth, Nova Scotia to Portland, Maine, is back in business. The new ship, Nova Star, comes complete with spa, casino, four restaurants, an art gallery, and private cabins to pass the time during the 10-hour ride. Yet with all that the ferry has to offer, find out why it's still hard to leave Yarmouth to catch it on time.

Come and Explore the Residence of the Governor General at the Citadelle of Quebec!
http://www.marketwired.com/press-release/come-and-explore-the-residence-of-the-governor-general-at-the-citadelle-of-quebec-1922010.htm
We have been invited to visit the official summer residence of Their Excellencies the Right Honourable David Johnston, Governor General of Canada, and Mrs. Sharon Johnston. June 24 to September 1: Daily, from 11 a.m. to 4 p.m.

Ottawa spends more on military history amid criticism over support for veterans
http://www.theglobeandmail.com/news/politics/ottawa-commemorates-military-history-while-under-fire-for-veteran-support/article19176795
Read about what the government is planning to spend $83-million over the remainder of this decade to commemorate Canada’s military history.

Heroic Exploits at Blyth Festival as BILLY BISHOP GOES TO WAR
http://www.broadwayworld.com/toronto/article/Heroic-Exploits-at-Blyth-Festival-as-BILLY-BISHOP-GOES-TO-WAR-20140619#
There will be a play put on at the Blyth Memorial Hall from July 2nd to August 15th about Canadian First World War flying ace, Billy Bishop. He was officially credited with seventy-two victories, making him the top pilot in the British Empire.

Bid for Manitoba's first UN world heritage site moves forward
http://www.winnipegfreepress.com/local/Bid-for-Manitobas-first-UN-world-heritage-site-moves-forward-263879681.html
Manitoba is waiting to hear if Pimachiowin Aki—a forested site on Manitoba's easterly side, next to the province of Ontario—is going to be considered as a United Nations World Heritage Site. Canada now has 17 such UNESCO sites.

Nutana walking tour blends history with technology
QR codes provide historical info when scanned with smartphone
http://cjme.com/story/nutana-walking-tour-blends-history-technology/371411
The Broadway Business Improvement District (BBID) and the Nutana Community Association have teamed up to expand its Heritage QR Code Project from businesses on Broadway Avenue to homes, parks. and buildings in the Nutana neighbourhood of Saskatoon, Saskatchewan.

Royal Alberta Museum in dispute over aboriginal consultations http://www.cbc.ca/news/canada/edmonton/royal-alberta-museum-in-dispute-over-aboriginal-consultations-1.2677492
A battle is playing out behind the scenes over how the history of indigenous peoples will be presented at the new home of the Royal Alberta Museum, now under construction in downtown Edmonton.

Residential school abuse-claim documents should be destroyed, adjudicator argues
http://www.edmontonjournal.com/Residential+school+abuse+claim+documents+should+destroyed+adjudicator+argues/9956422/story.html
There is quite a controversy brewing as some people are saying that Canada risks ‘privacy disaster’ and will cause ‘great harm’ to victims of the residential school abuse claim.

Edmonton businessman begins build on B.C. burial ground Cowichan, Saanich, and Penelakut ancestors buried on Grace Islet in Ganges Harbour
http://www.cbc.ca/news/canada/british-columbia/edmonton-businessman-begins-build-on-b-c-burial-ground-1.2683530
On National Aboriginal Day, B.C. First Nations and Gulf Islanders rallied and canoed around a tiny B.C. island cemetery that is being developed into the site of a luxury home for Barry Slawsky, an Edmonton-based businessman and former owner of the San Francisco Gifts chain of stores. 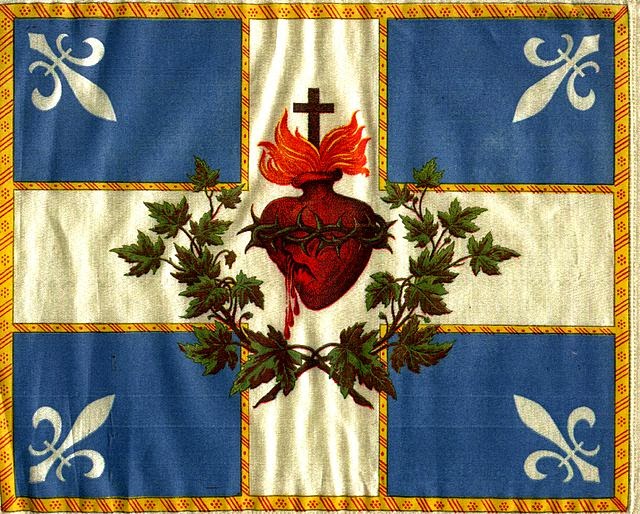 The current flag of Quebec is based on this design, and was adopted in 1948.

Known as Fête de la Saint-Jean-Baptiste or Saint-Jean Baptiste Day, it is held annually on June 24, is the feast day of St. John the Baptist, and it is celebrated in Quebec and other areas of French Canada.

In 1834, Ludger Duvernay, a journalist, visited the St Patrick's Day celebrations in Montreal, and was inspired to create a similar event for French-Canadians. In 1843, he established the Saint-Jean Baptiste Society to promote the celebration of Saint-Jean Baptiste Day. It was supported by the Catholic Church, which saw it as a way to promote social and moral progress.

In 1977, Saint-Jean Baptiste Day was recognized as the 'national' holiday of Quebec.

Today, it is included in the week’s celebration as Canada gets ready for its birthday party on July 1st.