Are LAC Employees Being Muzzled?

If you read the article, any public appearance by LAC employees has to be vetted by the LAC, and will any speeches that the employees will give will have to follow the rules set forth by the federal government.

So what will happen to the yearly review of the LAC given at the BIFHSGO conference every year? Will it be a simple LAC rehash of the year, or will it be the employee's true feelings? I wonder ...

To read the complete article, go to
http://o.canada.com/2013/03/15/federal-librarians-fear-being-muzzled-under-new-code-of-conduct

Posted by Elizabeth Lapointe at 5:42 PM No comments:

RootsTech 2013 is almost upon us, and I am getting ready to live stream the 13 talks that the speakers will give at this year conference.

FamilySearch has a blog today in which Paul M. Nauta, marketing manager for FamilySearch says  “RootsTech has something for everyone, whether an avid genealogist or someone just getting started and interested in telling and sharing personal and family stories or simply to discover the latest technologies and solutions to better connect the family,” said Paul M. Nauta, marketing manager for FamilySearch, the Church’s organization providing service to family history enthusiasts worldwide regardless of religious persuasion”.

Among the Canadian blogger that will be there, are –

Attendance is expected to exceed last year’s event, which attracted more than 4,000 registrants and was seen by more than 50,000 viewers of live streaming sessions. They expect 5,000+ to attend this year’s conference!

To see the website, go to www.rootstech.org
Posted by Elizabeth Lapointe at 12:11 PM No comments: 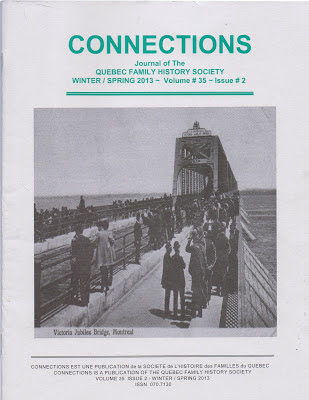 In this issue, there are a number of pieces that are of interest, for example, the article entitled The Mintram Family: Barnardo’s and The Titanic Connection which tells the story of how William Mintram, a Titanic survivor,  killed his wife,  and three of their children wound up in Canada after having been taken in by Barnardo’s Home in London.

The interesting point about this article is the description that Walter (William’s son-in-law) gave of the sinking of the Titanic. I had never read such an account before.

In the article Streetcars Named Tragedies, Sandra Belliveau writes about two people in her family who were impacted by streetcars in Montreal – a stranger whom her grandmother Ethel Saunders helped, and subsequently received a commendation, and her paternal great-grandfather, William Stuart, who was killed on August 11, 1911.

In the last article entitled Victoria Bridge and the Irish of Montreal, Dawn Miller Quellette gives the linkage between the building of the Victoria Bridge across the St. Lawrence River, and the famous Black Stone Monument to the Irish immigrants was dedicated in 1859.

This journal is also a welcome sight when it arrives because of all of the information it contains. There is an additional article on the British Home Children, looking for obituaries, and a What Was News to Your Ancestors.

If you want to be kept current on the news of interest to the QFHS, read the Bulletin Board at www.qfhs.ca/cpage.php?pt=53

If you wish to know more about QFHS, you can go to www.qfhs.ca
Posted by Elizabeth Lapointe at 8:36 AM No comments: